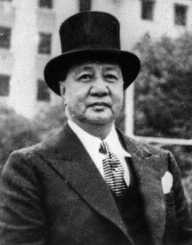 In the history of every country, there is a leader who gives the people Hope. Philippines’s Golden Age dawned when Ramon Magsaysay became the 7th President of the country.

From restoring law and order to agricultural reforms, Magsaysay did everything in his power to make his country prosperous and its people happy. His reforms gave a significant boost to trade, industrial expansion & removing corruption.

Son of a blacksmith, Ramon’s birth name was Ramon Del Fierro Magsaysay. His mother was a school teacher. Ramon Magsaysay was born in Iba, Zambales, Philippine Islands, on Aug 31, 1907.

Ramon Magsaysay finished his high school from the Zambales Academy, and then joined the University of Philippines for a pre-medical course. In 1928, he changed his field of study. He went to the Institute of Commerce at Jose Rizal College. He earned a B.Com degree in 1932.

After completing his education, Magsaysay started working as an automobile mechanic to earn a living.

Role In The World War II

Ramon Magsaysay took part in the Second World War. He joined the motor pool of the 31st Infantry Division of the Philippines Army. In 1942, he narrowly avoided capture by the Japanese on quite a few occasions and resorted to Guerrilla Warfare. Soon, he commanded a 10,000 robust Guerrilla Army that played a major role in clearing Zambales of the Japanese forces.

After the war, Ramon Magsaysay was elected twice to the House of Representatives – in 1946 and 1949.

In 1950, he accomplished one of his most significant military achievements. With the skills, he learned during Guerrilla warfare, and his experience in the World War II, he was able to redirect the army and efficiently crush the Hukbalhap Guerrillas.

Ramon later realized that part of the reason for such rebellions was the corrupt government. Deciding to bring about radical changes, he resigned from the post of the Secretary of Defence and became a nominee for Presidential Elections.

Ramon Magsaysay was the most beloved President of Philippines. Right after getting elected, he introduced several reforms including the removal of the corrupt and incompetent officials. After his election, the people showed increasing faith in their military and their government.

The Philippines went on to become one of Asia’s cleanest and well-governed countries. The highlight of his career as the President, however, was the suppression of the Hukbalhap rebels. Named Operation Thunder Lightning, this anti-Huk campaign was instrumental in increasing peace and stability in the country.

Under his governance, the diplomatic relations with other countries, especially the U.S. also flourished.

Ramon Magsaysay was killed in a plane crash on March 16, 1957, during the last year of his term as President. The plane carrying him and 24 other people including the crew, crashed on Mt. Manunggal on its way to Manila. Over 2 million people came to say the “Last Goodbye” to their beloved President.

His son Ramon Jr. became a prominent political figure in the Philippines a few years after the former’s death.