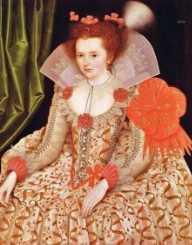 Barque composer Elisabeth-Claude Jacquet De La Guerre was born on the 17 March 1665 in Paris, France. She came from a family of musicians and musical instrument makers.  Her father and two brothers were organists at Saint-Louis-en-l'ile church and an early age she showed an early aptitude for music.

When Jacquet de la Guerre was five years old, she performed at the court of King Louis XIV. She earned the nickname the small wonder as well as the patronage of the King and Madame de Montespan.

After initially being taught at home by her father, Jacquet de la Guerre was educated at the French court under the supervision of Madame de Montespan.

In 1687 Jacquet de la Guerre produced a book of harpsichord pieces which included suites of French dances, chaconnes, and toccatas using both Italian and French styles. Her ballet Les Jeux à l'honneur de la Victoire was produced around this time. She published a five-act opera which was performed in Paris in 1694. Jacquet de la Guerre wrote solo and trio sonatas throughout the 1690-1700s and produced some of the early solo and trio sonatas for violin. She also created music for harpsichord and three volumes of cantatas.

In 1712 Maximilian Emanuel II, the Elector of Bavaria visited Frances and attended a performance by Jacquet de la Guerre in Paris.

After the death of her husband and later her son in 1704 Jacquet de la Guerre began giving concerts in her home and built up a large following which included visits from leading musicians of the day.

Jacquet de la Guerre was commissioned to write a piece celebrating the recovering of Louis XV after he had contracted smallpox. This work was Te Deum (1791).

In 1729 a commemorative medal celebrating her musical achievements was made.

When Titon du Tillet produced Parnasse Francais (1732), Jacquet de la Guerre was one of seven musicians to appear in the publication.

She is regarded as one of France’s most important Baroque composers.

Jacquet de la Guerre married Marin de la Guerre in September 1684, and they settled down in Paris. The couple had one child, a son. Her husband and son both died in 1704.