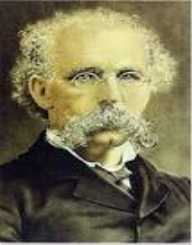 American labour leader and politician Terence V. Powderly was born on 22 January 1849 into a family of Irish immigrants in Carbondale, Pennsylvania. His parents were Madge Walsh and Terence Powderly who had immigrated to the United States in 1827. He was one of 12 children.

Terence V. Powderly started his working life at 13 when he was employed on the Delaware and Hudson Railway as a switchman. At 17, he was given an apprenticeship as a machinist with master mechanic James Dickson (1866-1869). In 1871, Powderly joined the Subordinate Union No.2 of Pennsylvania which belonged to the Machinists and Blacksmiths International Union.

He served as the secretary of the union and later as the president.

Terence V. Powderly joined the Knights of Labor in 1874 and by 1879, was the Grand Master Workman of the Knights of Labor. He was eventually running a union which had a membership of 700,000 workers. He was in favour of the 8-hour day, better working conditions and wages. To attain this, he believed in peaceful negotiations and boycotts rather than general strikes.

His reasoning led to disputes within the union with the factions who were in favour of striking. Samuel Gompers left the Knights of Labor and founded the American Federation of Labor which weakened the Knights of Labor. After the Haymarket Square Riot in Chicago, Illinois in 1886, the union’s popularity had waned, and Powderly resigned as Grand Master Workman in 1893.

Gompers American Federation of Labor went on to become one of the most powerful unions in the United States.

In the latter half of his working life, Terence V. Powderly practised law and also held various government positions.

In 1889, Terence V. Powderly published Thirty Years of Labor. His autobiography The Path I Trod (1940) was published sixteen years after his death.