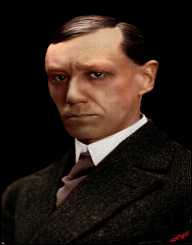 Friedrich Gustav Maximillian “Max” Schreck was a German actor and a very famous vampire character. Born on September 6, 1879, he is best known for his role as the vampire Count Orlok in F.W Murnau’s silent film Nosferatu: A Symphony of Terror in 1922. Schreck started his career in theatre before venturing into film, making a debut in the 1920s. His works include Nathan the Wise, 1922, Out of the Mist, 1927, Serenissimus and the Last Virgin, 1928, Modern Pirates, 1928, and Fight of the Tertia in 1929 among several others.

Friedrich Gustav Maximillian “Max” Schreck was born on September 6, 1879, in Berlin-Friedenau. He had a strong passion for theatre growing up, which his father did not support. However, he mother helped him through this passion by providing him with financial support for his secret acting lessons. After the death of his father, Schreck started attending drama school in Berlin. He later received further training at the Berliner Staatstheater (State Theatre of Berlin), where he completed in 1902.

After graduating from school, Max Schreck embarked with a nationwide tour with poet and dramatist Demetrius Schrutz. He appeared in theatres in Weissenfels, Mulhouse, Speyer, Meseritz, Erfurt and Rudolstadt, and Frankfurt am Main among others. He later joined the theatre group of Max Reinhardt in Berlin. During the 1910s he joined the Munich Chamber Games for several appearances.

Between 1919 and 1922, Max Schreck started appearing at the Munich Kammerspiele. He appeared in several roles including Bertolt Brecht’s expressionist production, Trommeln in der Nacht (Drum in the Night). He made a film debut with The Mayor of Zalamea, an adaptation of the six-act play for Decla Bioscop and followed it with The Story of Christine von Herre in 1921.

Prana Film hired Max Schreck in 1921 for the production of Nosferatu, a film adaptation of Bram Stocker’s Dracula. The film was the company’s only production since it declared itself bankrupt after the production to escape any payment of copyright infringement settlement to Stoker’s widow, Florence Stoker.

In Nosferatu, Schreck played Count Orlok, a fearsome vampire. After the film was released, Florence sued the production company, and a court ordered all copies of the film be destroyed. However, since the film had already been released, some copies of it survived. The film was commercially successful in the United States.

After Nosferatu, Max Schreck did not play any other vampire role. He since continued his career in theatre and German films. He appeared in Bertolt Brecht’s 16-minute comedy Mysterien eines Friseursalons (Mysteries of the Barbershop) in 1923, alongside Blandine Ebinger, Erwin Faber, and Karl Valentine. He played roles in several films including The Merchant of Venice, 1923, At the Edge of the World, 1927, Scampolo, 1928, Ludwig II, King of Bavaria, 1929, A Woman Like You, 1933 and Must We Get Divorced in 1933. Others include The Tunnel, 1933, Knockout, 1935, and Donogoo Tonka in 1936.

Max Schreck married actress Fanny Normann. He died of heart attack on February 20, 1936, after playing The Grand Inquisitor in the play Don Carlos the previous evening. He fell ill that evening and was sent to the hospital, dying the following morning. He was interred at Wilmersdorfer WWaldfriedhof Stahndorf in Brandenburg on March 14, 1936.