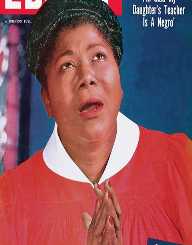 Mahalia Jackson was an American gospel singer born on October 26th, 1911. She was particularly famous for her powerful contralto voice. During her music career, she many of her albums were gold-certified. With her hit single "How I Got Over," Mahalia garnered a Grammy Award.  Her other single "Move On Up a Little Higher" also earned her a Grammy Hall of Fame Award in 1998 for the gospel category.  The talented singer began singing while she attended Mount Mariah Baptist Church.

Mahalia Jackson was born on October 26th, 1911. Her place of birth was in New Orleans, Louisiana in the United States. She is the daughter of John A and Charity Clark who earned a living as a laundress and maid. She had a brother called Roosevelt Hunter or Peter.

Sadly, Mahalia Jackson lost her mother when she was around four to five years old. Therefore, her aunt Duke took over the responsibility of raising her along with her brother. At the age of 12, she was baptized by the pastor of Mount Mariah Baptist Church, the Rev. E.D. Lawrence. This occurred in the Mississippi River. Since then, Mahalia Jackson began singing for the church.

Mahalia Jackson moves to Chicago in her teen years devoted to studying nursing. However, she later focused her attention on her passion for music. She joined Greater Salem Baptist Church where she later joined Johnson Gospel Singers. After years of working with the group, she teamed up with the gospel composer Thomas A. Dorsey. Together they gave several performances all over the States.

Meanwhile, Mahalia Jackson also took odd jobs to support herself. Her music career had not been quite established at the time. She started off as a laundress then beautician and later owned a flower shop.

In the 1930s, she started recording her songs. In 1947, her single "Move On Up a Little Higher" took her to a higher level of her singing career. The song became the highest selling single song in the gospel history ever.

During her tour abroad in Europe in 1952, the gospel singer became even more famous and inspired many. Later in 1956, she appeared for her first time in The Ed Sullivan Show. Two years later, she released her album Black, Brown and Beige helped by Duke Ellington. Other albums Mahalia later released include The Power and the Glory released in 1960 followed by Silent Night: Songs for Christmas. Later in 1965, she also released Mahalia

Mahalia Jackson was a great advocate of civil rights. She even performed the song “I Been ‘Buked and I Been Scorned” in March on Washington. She wrote an autobiography during her career titled Movin’ On Up.

Besides all those, Mahalia Jackson also ventured into the film industry during her career. She featured in Imitation of Life.

Mahalia Jackson took her last breath on January 27th, 1972 in Chicago. At the time of her death, she was receiving treatment at Little Company of Mary Hospital situated in Evergreen Park, Illinois. Apparently, the gospel singer had suffered a heart failure following diabetes complications.