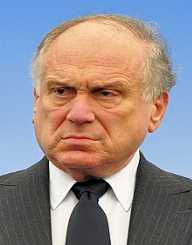 Johannes Rau was born on January 16, 1931. He was a German politician and later became the president of Germany from the year 1999 to 2000. As Social Democratic Party member, he acquired many legislative seats. He was against Nazism and had a patriotic tendency as opposed to nationalism. Rau was a staunch Christian, and in his political careers, he was able to receive many awards.

Johannes Rau was born on January 16, 1931, in Wuppertal-Barmen, West of Germany (Rhine Province). He was the third born among a family of five children. When he was growing up, Rau was a follower of the Nazi resistance movement, which was formed through the intervention of the German Protestant Church.

During his childhood schooling, Rau was an active member of the Confessing Church, which was a constituent of the German Protestant Church. He dropped out of school in 1949 where he became a journalist. Rau worked mainly with Protestant Youth Publishing House where he developed his skills as publisher and journalist.

1n 1931, Johannes Rau started as an apprentice to a bookseller. In 1952, Gustav Heinemann, Rau’s mentor, formed the German People’s Party which Rau joined politics through it but the party was disbarred in 1957. He was elected as a member of parliament for North Rhine–Westphalia state from 1957 to 1999. In 1958, Rau went with Gustav to Social Democratic Party in Germany. Rau was under SDP assigned to oversee the Wuppertal region as deputy governor and the chair.

In 1964, Rau joined the City Council as the Chair of SDP for three years. He became SDP’s executive from 1968 to 1999 and in 1969; he became the Mayor of Wuppertal for a year. He worked in the state government as Minister for science and research in 1970 for one year. From 1978 to 1998, Rau worked as minister-president.

From 1977 to 1999, Johannes Rau served as chair of the party state organization. His service as the President of the Bundesrat for a two-term period enabled him to be elected as the president of Germany from the year 1999 to 2000. This happened after his voluntary stepping down from Minister President and Chairman of SPD.

Johannes Rau's reunification was successful as he eliminated the negativity, which surrounded the historical violence of Germany. As the Science and Education Minister in 1970, Rau was able to enable the construction of five universities across different places and at Hagen; he further set up the first distance learning institution.

In his lifetime, Johannes Rau received fifteen honorary doctorates. His promotion of tolerance and social justice never went unnoticed as he was awarded the Leo Baeck Medal in 2001.

From 1995 to 2000, Johannes Rau was diagnosed of an abdominal aneurysm but underwent surgery later after long time refusal. In 2005, he had heart problems, which was solved by fitting in an artificial valve but had a lengthy history of heart diseases that led to his death.

In 1982, Johannes Rau married Christina Delius, a political Scientist, and had three children: two daughters and one son. They were Laura Helene, Philip Immanuel, and Anna Christina. Christina Delius is the daughter of Gustav Heinemann, his mentor. After his presidential tenure, the family lived in Berlin, the federal capital. Rau passed on January 27, 2006.