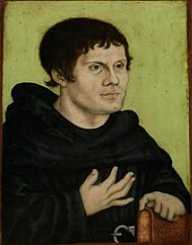 Martin Luther was born on November 10, 1483, in Eisleben, Saxony, which is now a part of Germany. Both of his parents were of a peasant lineage, but his father was a successful miner and ore smelter. The family moved to Mansfeld in 1494, where his father had ore deposits.

Despite mining being a tough business, Luther’s father wanted his son to be educated and become a lawyer. Martin started his schooling in Mansfeld, and when he was 14 years old, he went to Magdeburg to continue studies. In 1498 he began attending school in Eisleben and studied grammar, rhetoric, and logic.

In 1501, Martin Luther enrolled at the University of Erfurt and received a Master of Arts degree. He was on his way to becoming a lawyer, but an event occurred that changed his life. He was caught in a horrific thunderstorm and feared for his life. Luther prayed to St. Anne for his life to save him, in return promising to become a monk.

Luther was saved, and he kept his promise. This greatly disappointed Luther’s father, but he was more afraid of hell and God’s wrath and hoped to find salvation by living in a monastery.

Martin Luther began to study scripture and gained religious enlightenment in 1513. He was reading the Psalm 22, where Christ wailed in his cry for mercy on the cross. Two years later, he was preparing a lecture and read “The just will live by faith.” He dwelled on the thought for some time and realized that the key to salvation is not to fear God, but believe that faith alone will bring salvation. This thought set out the rest of his life and marked the motion of Reformation.

When in 1517 Pope Leo X announced a new round of indulgences, Martin Luther got angry and nailed a sheet of paper containing 95 theses on the door of the university chapel. These theses were meant as discussion points but ended up criticizing the indulgence system and how they corrupt people’s faith. Luther also called upon Archbishop Albert Albrecht of Mainz to end selling of indulgences. Luther’s theses spread out throughout Europe within months.

The Church took steps to stop Luther, ordering him to recant his theses on direct orders of the Pope in 1518. Martin Luther stated that he would not withdraw unless scripture proved him wrong and that he does not believe that the papacy has any authority to interpret the scripture. His resistance led him to be excommunicated from the church. Throughout the following year, Luther continued to lecture and publicly declared that the Bible did not give the Pope the right to interpret the scripture. In 1520, Pope sent a letter to Luther, setting an ultimatum for Luther, who burned it publicly.

Following his resistance, Martin Luther was excommunicated from the church in 1521. He was summoned by the general assembly of secular authorities to recant his statements, but since no one could provide Luther with a reason from the scripture, he refused. In 1521 the council released the Edict of Worms, which banned all of Luther’s works and declared him a convicted heretic. This meant that Luther was a wanted man, but his friends helped him to hide.

While in hiding, Martin Luther translated the New Testament into German, so that the simple people could also read the bible. Luther returned to Wittenberg Castle Church in 1522, despite being a wanted man. He avoided being captured and began organizing a new church. He gained a lot of followers and was supported by the princess of Germany.

One of the bloodiest occasions of the Lutheran church was in 1524. A peasant revolt began, and Martin Luther decided to side with the rulers, to keep his church going. This meant the death of many peasants. However, Luther’s church continued to grow.

In 1525 Luther married Katharina von Bora. She was a former nun, who had left the convent. The couple had six children over the years.
In 1533, Luther began working at the University of Wittenberg as the dean of theology. He held the position until his death in 1546. He suffered from many illnesses, like arthritis, indigestions and heart problems. It is believed that the years of being a fugitive brought too much strain on his body.