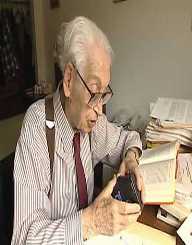 Ernst  Mayr was a famous taxonomist, ornithologist, tropical explorer, historian of science and philosopher of biology. Born on July 5, 1904, Ernst  Mayr became one of the leading 20th century's evolutionary biologist. Mayr’s work was a major contribution to the theoretical revolution that led to the modern evolutionary synthesis of Mendelian genetics, Darwinian evolution, and synthesis. Ernst  Mayr also helped in developing the biological species concept. In his book, Systematic and the Origin of Species, elaborated on Charles Darwin’s postulation that multiple species could evolve from a single common ancestor which created the species problem. Elaborating on it, Ernst  Mayr newly defined species as a group of species that can interbreed, excluding others.

Ernst  Mayr stated that “when populations within a species become isolated by geography, feeding strategy, mate choice, among others, it can result in them behaving differently from other populations through genetic drift and natural selection. Thi can lead in their evolving into new species.

Ernst  Mayr was born on July 5, 1904, to HelenePusinelli and Dr. Otto Mayr. His father was a district prosecuting attorney at Wurzburg, but with his interest in natural history, he occasionally took his children to field trips. This interest was picked by Ernst  Mayr, and that would result in his future career path. His father died at age 13, and the family moved to Dresden, where Ernst  Mayr studied at the Staatsgymnasium (Royal Gymnasium) in Dresden-Neustadt until 1918.

He continued with his high school there, where Ernst  Mayr joined the Saxony Ornithologists Association in 1922. Ernst  Mayr became friends with Rudolf Zimmermann, who mentored him in ornithological. After his graduation, he enrolled at the University of Greifswald in 1923 where Ernst  Mayr initially studied medicine just to satisfy his family tradition. Ernst  Mayr, however, changed his focus to enrol in the Faculty of Biological Science after a year.

According to Mayr, his interest in ornithology kept growing so "chose Greifswald at the Baltic for my studies for no other reason than that ... it was situated in the ornithologically most interesting area." His change in the field of study was influenced by Edwin Stresemann who he had met during his high school days. Edwin was also an ornithologist and served as an inspiration for Mayr. Ernst  Mayr later studied at the University of Berlin where he received his doctorate in ornithology under Dr. Carl Zimmer on June 24, 1926, at the age of 21.

After his doctorate, Ernst  Mayr picked a position at the Berlin Museum with a monthly payment of 330.54 Reichsmark. In 1927, Ernst  Mayr partook in an International Zoology Congress at Budapest where Ernst  Mayr was introduced to banker and naturalist Walter Rothschild by Stresemann. Walter then asked Ernst  Mayr to undertake an expedition to New Guinea on his behalf and that of the American Museum of Natural History in New York. Ernst  Mayr embarked on the expedition where he collected thousands of bird skins. This would lead to him naming 26 new bird species and 38 new orchid species. While there, Ernst  Mayr accompanied the White South Seas Expedition to the Solomon Islands. Mayr left New Guinea for Germany in 1930.

Ernst  Mayr accepted the position of a curator at the American Museum of Natural History in 1931. While there, Ernst  Mayr played an important role in getting back the Walter Rothschild collection of bird skins. The skins had been sold off in order to pay a blackmailer. In 1942, Ernst  Mayr published his book, Systematics and the Origin of Species to complete the evolutionary synthesis Darwin had started. Influencing American ornithological research, Ernst  Mayr also monitored the young birdwatcher through which he identified the differences between American and German birding societies. With this discovery, Ernst  Mayr stated that the German society "far more scientific, far more interested in life histories and breeding bird species, as well as in reports in the literature." Under the auspices of the Linnean Society of New York, Ernst  Mayr took the initiative to organize a monthly seminar for young birdwatchers.

In 1953, he joined the Harvard University, where he was appointed the director of the Museum of Comparative Zoology from 1961 to 1970. Ernst  Mayr retired as an emeritus professor of zoology in 1953. His retirement paved way for his writing works. He published more than 200 papers in several journals and 25 books, 14 of which were published after age 65.

Ernst  Mayr received several awards for his works. He won the Balzan Prize, International Prize for Biology, National Medal of Science, the Lewis Thomas Prize for Writing about Science, the History OF Science Society’s Sarton Medal and the Loye and Alden Miller Research Award. Others include Leidy Award of theAcademy of Natural Sciences of Philadelphia, Darwin-Wallace Medal from the Linnean Society of London and the Eisenmann Medal of the Linnean Society of New York among several others.

Being a trade biologist, Ernst  Mayr called as “beanbag genetics” the early mathematical approaches to evolution with reference to those J.B.S Haldane. Ernst  Mayr argued that other factors like reproductive isolation must be taken into consideration. Ernst  Mayr was also very critical of molecular evolutionary studies like that of Carl Woese and rejected reductionism in evolutionary biology in most of his writing. He rather embraced the study of the whole genome instead of only isolated genes.

Ernst  Mayr noted that. “The idea that a few people have about the gene being the target of selection is completely impractical; a gene is never visible to natural selection, and in the genotype, it is always in the context of other genes, and the interaction with those other genes make a particular gene either more favorable or less favorable. In fact, Dobzhansky, for instance, worked quite a bit on so-called lethal chromosomes which are highly successful in one combination, and lethal in another. Therefore, people like Dawkins in England who still think the gene is the target of selection are evidently wrong”.

Ernst  Mayr wrote several books including,Systematics and the Origin of Species, from the Viewpoint of a Zoologist, Animal Species and Evolution, Birds of the Southwest Pacific: A Field Guide to the Birds of the Area Between Samoa, New Caledonia, and Micronesia, Principles of Systematic Zoology, List of birds collected by Ernst Mayr, My Dutch New Guinea Expedition and The emergence of evolutionary novelties among several others.