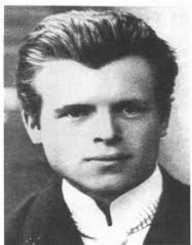 Hermann Rorschach created the controversial Rorschach inkblot. The device is used to measure human beings’ social behavior. The method is referred to as a Rorschach test; it is often used to identify psychotic and neurological disorders.

Hermann Rorschach was born on 8th November 1884 in Zurich Switzerland. He was the eldest child in a family of four children. His parents Ulrich and Philippine Rorschach were both Swiss.

His father inspired him always to express himself creatively. At the age of 12, he lost his mother and seven years later his father, a teacher also died.

In high school, it became difficult for Hermann Rorschach to choose between taking art and science since he was talented in both fields.

Through a letter addressed to Ernst Haeckel, a German biologist, he sought his advice on the dilemma. He later decided to do science after his father passed on.

In 1904, Hermann Rorschach enrolled in Académie de Neuchâtel, where he pursued medical studies. The institution had branches in Zurich, Berlin, and Nuremberg.

He also learned Russian during his time in college. From the beginning of his course, he was a bright student, and he often tutored other students in the institution.

His adventure of traveling opened him to countless opportunities. After completing the medical course, he had to choose between working in Switzerland or move to Russia.

Hermann Rorschach first worked as an assistant at a Cantonal Mental Hospital. During his time in the hospital, he completed a doctoral dissertation under the supervision of Eugen Bleuler.

His fascination for the Russian culture led him to Russia in 1913 where he studied contemporary psychiatric methods. In Russia, he settled in Kryukovo.

One year later, he returned to Switzerland to work with Waldau University Hospital. The university later promoted him to the position of an assistant director at Herisau regional psychiatric hospital.

He later wrote and published a book Psychodiagnostik to explain the basis of inkblot test.

In 1917, Hermann Rorschach combined his fascination with art and knowledge on psychoanalysis to come up with an inkblot test. Rorschach became the first scientist to use the device in analyzing how patients viewed their association with unplanned provocations.

His first test involved 300 patients and a total of 100 control subjects. The result of the test was based on factors such as content, conventionality, location, and quality.

The outcome was then used to conclude the social behavior of the patient. Rorschach later combined his findings and compiled them in a book Psychodiagnostics in 1921.

Bruno Klopfer, a German psychologist, later improved the device after Rorschach's death. The invention became the most used psychiatric device used in the United States.

Hermann Rorschach met Olga Stempelin in the University. The two had a romantic relationship until 1913 where they tied the knot. The couple had two children together Ulrich Wadin and Neither Lisa.

Hermann Rorschach died of peritonitis at the age of 37 on 1 April 1922. Despite passing at a young age, Rorschach left a lasting legacy of inkblot test.