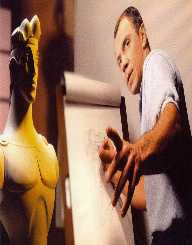 Andreas Deja is one of the talented and artistic character animators. Born on April 1, 1957, Deja is a Polish-born German-American animator. His works have gained prominence due to the in-depth of knowledge applied to realise a tantalising display of work. His works on Disney characters are splendid, and that makes him a legend in his own right. Some of his iconic Disney characters include Gaston in Beauty and the Beast, Scar in King Lion and Lilo in Lilo and Stitch and Jaffar in Aladin. Deja once had a dream to work with Disney, and indeed that dream came to fruition. However, it didn’t come by chance but by dint of hardwork, passion, and dedication from this talented animator.

Andreas Deja was born on April 1, 1957, in Gdansk, Pomorskie, Poland. He later left the country for Germany with his parents. Deja developed the passion for animation at the age of 11. It all happened when he had the opportunity to see Disney’s The Jungle Book. This has changed his life forever, and as he dreamt of working for Disney, it truly came to fruition. Deja had his secondary education at the Theodor-Heuss Gymnasium and later enrolled at the Folkwang Hochschule in Essen, Germany where he studied graphic design.

Andreas Deja's childhood dream of working with Disney came into being when Disney hired him in 1980. This was after he had some correspondence with the senior Nine Old Men of animation, Eric Larson, who was in charge of the Disney studio training department. Since he was in Germany at the time, he had to move to the US to start his work. His first assignment was in the film, The Black Cauldron in 1985 which he carried out diligently. As a young upcoming animator, he had mentorship under the then Nine Old Men who truly helped him to achieve the feat he is enjoying now.

To show his appreciation Deja collected information from them and has decided to write a book on each of the Nine Old Men. After his first successful project he has since worked on Disney characters like King Triton in The Little Mermaid, Lilo Pelekai in Lilo and Stitch, Jafar in Aladin, Gaston in Beauty and the Beast and Scar in The Lion King. Others include Mama Odie in The Princess and the Frog and Tigger in Winnie the Pooh. He has served as a supervisor animator in most of Disney films.

Andreas Deja has since resigned from Disney after about three decades of career and now working on personal projects like producing the independent animated film. His most present work is in the animation film Mushka which is set to be released in 2017.

Andreas Deja was awarded the Winsor McCay Award at the 35th Annie Award. The award was for his enormous and ingenuity contribution to animation.

Andreas Deja has never hidden his sexuality as gay. There is a school suggesting that his sexuality influences some of the Disney characters.