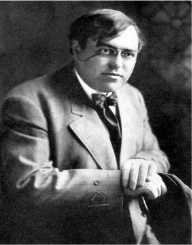 Jacques Futrelle was an American fiction mystery fiction writer and journalist who died on board the RMS Titanic on its maiden voyage from Southampton to New York.

Jacques Futrelle was born in Pike County, Georgia in the USA on April 9, 1875. He was the son of Harmon Heath and Linnie Bevill Futrelle. Growing up in pick, the young lad went to Pike County School for his elementary education. Often, his father taught him the French language at home. He skipped going to college for employment at the Atlanta Journal when he graduated from high school aged 18. He left for Boston for a journalist job but returned to the Atlanta Journal within a year.

In 1895 at the age of 20, he married his girlfriend Lily May Peel and moved to New York. Futrelle got a job at the New York Herald as a member of the editorial team. The couple had two children Virginia and John while living in New York. Virginia was born in 1897 and John in 1899.

Still a budding journalist at the New York Herald doing feature stories and newspaper articles, he ventured into detective investigating stories. A longtime admirer of the Sherlock Holmes stories, Futrelle used his creativity to formulate captivating stories in the world of mystery detective fiction. His love for fiction got interrupted by his deployment to the front of the Spanish American war in the west. He spent close to year reporting and writing from the frontlines of the war. Exhaustion and ill health drove him to quit the work for a while. He went to Scituate in Massachusetts with his family and recuperated at his sister’s house.

Futrelle never returned to journalism after gaining back his strength. He moved to the city of Richmond where he worked as a theater manager for two years. Futrelle wrote several plays and other dramatic expression productions for the theater in Richmond. After the lapse of his contract, he moved again to the Boston American company. He took up the post of a creative short stories writer. Futrelle fashioned a detective character called Professor Augustus S.F.X. Van Dusen as his equivalent of the famous Sherlock Holmes. Van Dusen became known as the Thinking Machine for his ability to crack open difficult mystery cases.

The Thinking Machine appeared in close to fifty detective stories written from 1905 to 1915. Detective Van Dusen was the opposite of Sherlock Holmes. While Sherlock Holmes had humane tendencies in his daily work routine, Van Dusen did not have feelings. He proved once and again that the end justifies the means. To him, his brains were smarter and more intelligent than any other situation brought to him. He was a tough detective who put his work above any human emotion. This was demonstrated in the short story titled The Problem of Cell 13. Van Dusen makes a daring escape from a high-security prison cell without being caught. He proved his point. His brains were more intelligent than the concrete walls and the surrounding barbed wire. Some of the other stories of Van Dusen included The Great Auto Mystery, the Man Who Was Lost, the Ralston Bank burglary and The Scarlet Thread.

He transited from the short stories to writing novels in 1906. With his name already famous, Futrelle quickly broke even with his novels. He spent the next six years writing and publishing novels. Futrelle built a holiday house for his family in Scituate.

Futrelle and his wife traveled to Europe in 1912. They left their two children behind with their paternal grandparents in Pike County, Georgia. He worked for months with several newspaper companies writing in their columns and article corners. To increase his criminal investigative knowledge, he visited and did some research at the Scotland Yard headquarters in London. On April 9, 1912, Futrelle hosted a party to celebrate his birthday in London prior to his departure the following day. The couple boarded the state of the art RMS Titanic on April 10, 1912, along with other high profile dignitaries on the maiden voyage.

On the evening of April 14, 1912, the Futrelles gathered in the first class stateroom for an evening dinner. They bumped into each other after a slight sway of the ship. Futrelle assured his wife that it was just a slight iceberg. The invincible Titanic was sinking in the Atlantic Ocean. The captain gave the evacuation orders to his crew. After all the passengers had put on their life jackets, the process started. Women and children got into the lifeboats first. Futrelle convinced his wife to go into the last lifeboat without him.

May Futrelle made it to safety after the rescue teams picked them in the sea. Jacques Futrelle never made it. He died at sea and his body never found. He became one of the many passengers who were lost at sea and presumed dead. A fortnight after the tragedy, May wrote a column in the Boston Post of the last moments on the ship. She recounted of the men helping women and the children into the lifeboats, in full knowledge of the dangers of remaining on board. May narrated how the entertainment band continued to play symphony music as the ship sank.

Jacques Futrelle, the hero of the Van Dusen prison escape, died while saving others. The Van Dusen story remained just that, a fiction.