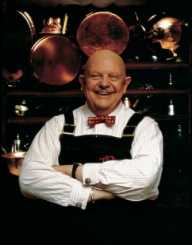 James Andrews Beard was an American cook, author, and television personality. Born on March 5, 1903, he specialized in American cuisine and considered the "father of American-style gourmet cooking.” Beard became the first chef to demonstrate cooking on network television in 1945and had several influences in the culinary circles.

Thousands of professional chefs came under his tutelage while many others benefitted from his great mentorship including chefs like Craig Claiborne and Julia Child. Beard has about twenty cookbooks to his credit including James Beard American Cookery, 1972 and Beard on Beard in 1973.

James Andrews Beard was born to Mary Elizabeth and John Beardon March 5, 1903, in Portland, Oregon. His father was a customs house worker and his mother a proprietor of the Gladstone Hotel. Young Beard became acquainted with Pacific Northwest cuisines including seafood, berries, and others through family vacations on the thePacific coast in Gearhart, Oregon.

Elizabeth was a food enthusiast, and her love for food would influence the future career of her son. His fondest memory in the Pacific as a child was at the 1905 Lewis and Clark Exposition. Beard battled malaria at the age of three, and during this time, he became familiar with other food prepared by their Chinese domestic workerJue-Let.

James Beard received education at Reed College in Portland, Oregon but was expelled in 1922, when his homosexuality was revealed. In1923, his mother sponsored him for a trip to Europe where he joined a theatrical troupe to pursue a career in acting and singing. He returned to the United States in 1927.

In 1937, James Beard moved to New York where he started a career as an actor and singer. He was however not successful and therefore partnered with his friend Bill Rhodes to open the catering company Hors d’Oeuvre, Inc to cater for cocktail parties.

During the World War II, his business collapsed due to the rationing of food at that period and began serving canteens to servicemen overseas. Beard began hosting the television cooking show I Love to Eat on NBC from 1946 to 1947.

This gradually built him a reputation in the culinary industry becoming one of the leading figures in that area. In 1981, Beard and his friend Gael Greene, started Citymeals-on-wheels in New York City, aimed at feeding homebound elderly and it still active until date.

With the vast experience in catering gathered from childhood and later in life, he started teaching and writing books. His first cookbook Hors D'Oeuvre and Canapés, published in 1940 was a collection of his catering recipes. He wrote several other books including

The Complete Book of Barbecue & Rotisserie Cooking (1954), How to Eat Better for Less Money (1954), James Beard Cooks with Corning (1973), New Recipes for the Cuisinart Food Processor (1976), James Beard's Theory & Practice of Good Cooking (1977) and The New James Beard (1981) among several others. He established the James Beard Cooking School in 1955, where he taught for the next thirty years. He also taught in other schools and among civic groups.

After his death, his former students Peter Kump and Julia Child spearheaded the founding of the James Beard Foundation in 1986, to preserve Beard’sNew York City home as the gathering place. It was also to honor Beard by instituting a scholarship scheme for would-be food professionals.

James Beard was gay. He died on January 21, 1985, of heart failure at his New York City home. His remains were cremated and ashes disposed at the beach in Gearhart, Oregon.