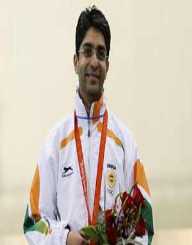 Indian businessman and professional shooter Abhinav Bindra was born on the 28 September 1982 in Dehradun, India to Apjit and Babli Bindra. As a boy, Bindra became interested in shooting, and his parents set up an indoor shooting range in their Patiala home for him to practice.

Abhinav Bindra was educated at The Doon School, St Stephen’s School in Chandigarh and the University of Colorado.

By the age of fifteen, Abhinav Bindra was representing his country at the 1998 Commonwealth Games where he was the youngest participant. At the 2000 Olympic Games, he was the youngest Indian participant. Participating in the Munich World Cup in 2001, he won a bronze medal and also set a new junior world record of 597/600. During 2001, he won six gold medals at various international meets.

Abhinav Bindra missed out on a medal at the 2004 Athens Olympics coming third. The same year he won a gold medal at the Commonwealth Games held in Glasgow, Scotland. Bindra won a gold medal at the ISSF World Shooting Championships in 2006. Then in 2008, he won an individual gold medal in the air rifle event at the Beijing Olympics. His win resulted in him becoming India’s first individual Olympic gold medalist. At the Commonwealth Games in New Delhi in 2010, Abhinav Bindra carried the flag for his country at the opening ceremony. He also took the Competitors Oath on behalf of all participants. Bindra lost in the qualification round at the 2012 Summer Olympics held in London.

Abhinav Bindra was appointed as a member of the GoSports Foundation in Bangalore board of advisors in 2014. The role provides support to shooters via the Abhinav Bindra Shooting Development Programme.

After finishing 4th in the finals of the 10m Air Rifle Event at the Rio 2016 Summer Olympics, Bindra decided that it was time to retire from his sport. At the event, Abhinav Bindra lost a shoot-off for a top three position to Serhiy Kulish.

Sportswriter Rohit Brijnath collaborated with Bindra to produce his biography entitled A Shot At History: My Obsessive Journey to Olympic Gold (2011).

Abhinav Bindra was awarded India’s third highest civilian honor, the Padma Bhushan (2009). Over the course of his sporting career, he won seventy-eight international medals. Winning gold at the 2008 Beijing Olympics meant that Bindra became the first Indian to have simultaneously held an Olympic title and a World title. He had previously won gold at the ISSF World Shooting Championships in 2006.