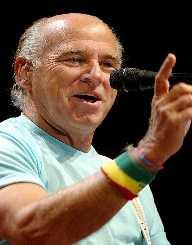 American folk-country singer-songwriter, actor, author, and entrepreneur James William Buffett was born on December 25, 1946, in Pascagoula, Mississippi, the United States of America to James Delaney Buffett, Jr. and Mary Lorraine. He spent most of his childhood days in Mobile, Alabama and attended the St. Ignatius School during his grade school years.

Drawn towards the charm of music very early in his life, he used to play trombone in the school band. He was actively involved in sailing from his early childhood as his grandfather was a sailor.

Growing up beside the Gulf of Mexico, William Buffett had regular exposure to sailing during his childhood days which later had a significant effect on his future life and his music as well. In 1964, he obtained his high school graduation from McGill Institute for Boys, Mobile, Alabama. He later enrolled at the Auburn University after having moved to Fairhope, Alabama.

Buffett took lessons to learn guitar during his first year in college. He later got transferred to Pearl River Community College and finally to the University of Southern Mississippi, Hattiesburg, Mississippi, from where he earned his Bachelor’s degree in Arts in 1969.

William Buffett moved to Nashville in pursuit of making a career as a country singer after completing his university education. He could manage a job of a correspondent in Billboard magazine to support him there initially.

He worked with a cover band named ‘The Now Generation.’ He was able to record his first album, the folk-rock ‘Down to Earth’ after making a recording contract in 1970. At this point in time, he often performed in public places in front of tourists in New Orleans to help support his expenses.

William Buffett even accompanied country music singer Jerry Jeff Walker on a busking expedition in November 1971 to the island city of Key West on the insistence of the later. After the expedition, he temporarily shifted to Key West and started leading a life of a cool, easy-going beach bum personality for which he is best known to the world.

He earned his livelihood by performing his brand of country folk music at the Chart Room Bar in the Pier House Motel. He created fusion music by combining country, pop, and rock music with tropical as well as coastal lyrical themes. The brand of music he made by such combinations is known as ‘Gulf and Western.’

William Buffett released two successive albums in successive years, ‘Down to Earth’ (1970) and ‘High Cumberland Jubilee’ (1971). He released his third album ‘A White Sports Coat and a Pink Crustacean’ in 1973 after moving to Key West, Florida.

The hit single of this album ‘Why Don't We Get Drunk (And Screw)’ found immense popularity among the beachcombing personalities of the area and confirmed his image of a laidback beach bum personality. Buffett continued to release more albums such as ‘Living & Dying in 3/4 Time’ (1974), ‘A1A’ (1974), ‘Havana Daydreamin' (1976) without much success. These albums and its’ spicy, catchy songs kept him buzzing locally with no national or international recognition.

Following the success of his seventh album, he released another popular album in 1978, ‘Son of a Son of a Sailor’ featuring the classic track ‘Cheeseburger in Paradise’. Both these albums were certified Gold and catapulted Buffett to national and international recognition and stardom.

During the 1980s, he concentrated more on live concerts and earned more money from his musical tours than the sale proceeds of his albums. However, he went on to release some albums during the next two decades aimed at his devoted fan followers. While doing all these, he diversified his interests by becoming an author and also making substantial investments in businesses.

His success as an accomplished author can be ascertained from the fact that he has written three number one best-sellers which occupied the tag of ‘The New York Times Best Seller’ for a considerable period. Two of these books namely ‘Tales from Margaritaville’ and ‘Where Is Joe Merchant?’ were in the category of fiction and the third book ‘A Pirate Looks at Fifty,’ is a non-fiction and straightway captured the number one position on the New York Times Best Seller non-fiction list.

His success in fiction as well as non-fiction genre enabled him to become the eighth entrant in the already existing list of seven great authors of the likes of Irving Wallace, Ernest Hemingway, Glenn Beck, Dr. Seuss, John Steinbeck,  Mitch Albom and William Styron, whose both fiction and non-fiction category of books featured in ‘The New York Times Best Seller’ list.

Among his notable business ventures "Margaritaville" retail store in Key West opened in 1985 and “Margaritaville Cafe” opened in 1987 are prominent. Besides, he started a line of beach clothing, a chain of clubs and his custom record label in the name of Margaritaville. He also has several resorts and casinos in his name.

William Buffett is a very popular live performer and continued to enthrall his audiences even today by playing several concerts every year in diverse locations all around the country. In 2013, he produced his latest album ‘Songs from St. Somewhere’. His super hit song Margaritaville is ranked 234 on the list of ‘Songs of the Century’ maintained by the Recording Industry Association of America.

William Buffett also worked for the Film and Television Industry according to his convenience which included works like writing soundtracks, producing, co-producing and acting. He is famous for his cameo appearance in the 2015 film ‘Jurassic World’, where he is famously seen with two margaritas in his hand, and the dinosaurs are freely roaming in the park.

William Buffett married Margie Washichek on July 20, 1969. The couple got divorced on November 1, 1972. He married for the second time to Jane Slagsvol, tying the nuptial knot on August 27, 1977. They have remained unseparated to date. They together have three children.

An enthusiastic sailor and a licensed pilot, Jimmy Buffett presently lives in Palm Beach, Florida where he is well known for his outspoken environmental activism. He is an ardent baseball fan and partially owns two small stature league teams - the Madison Black Wolf and the Fort Myers Miracle.