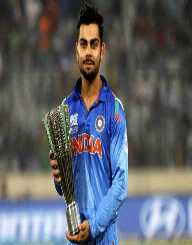 Virat Kohli was born on November 5, 1988, in Dehli, India. His father was a criminal lawyer, but his mother - a housewife. He has an older brother and older sister. Kohli became interested in cricket from an early age. When he was just three years old, he asked his father to play the game with him.

Virat Kohli attended the Vishal Bharti, Public school. His interest in cricket continued to grow, and his father decided to enroll him at the West Delhi Cricket Academy when he was nine years old. There Kohli began his training under Rajkumar Sharma. He participated in matches at the Sumit Dogra Academy.

Virat Kohli began his professional career in 2002 when he played for the Delhi Under-15 team. He became the leading run-getter in the 2002-03 season’s Polly Umrigar Trophy tournament. The following year, Kohli was selected by the Delhi Under-17 team. In the 2003-04 Vijay Merchant Trophy tournament, Kohli scored 470 runs in forum matches. The next season he repeated his performance and helped Delhi team to get the 2004-05 trophy.

Kohli’s excellent performance earned him a spot in India Under 19 squad when the team toured England in 2006. He scored on average 105 points in three-match ODI series, helping to secure India U-19 win.

Virat Kohli experienced a major personal loss in 2006 when his father died. He was Kohli’s biggest supported, both emotionally and financially. Kohli now had to take care of his family’s well-being, and this made him take the game more seriously. In 2008, Kohli led the Indian team to win the ICC Under-19 Cricket World Cup. After his success, Kohli was signed by the Indian Premier League Franchise Royal Challengers Bangalore for a $30,000 youth contract.

In 2008, Virat Kohli was selected for the ODI squad for the Sri Lanka tour. India went on to win the series 3-2. The following year, Kohli won his first Man of the Match award after he scored an unbeaten 79 against the West Indies during the 2009 ICC Champions Trophy. His great performance placed Kohli in the 2011 World Cup squad. He played in every match of the tournament and became the first Indian to score a century on World Cup debut game. That year, India won the World Cup for the first time since 1983.

In 2011, Virat Kohli was placed in the Test squad for the West Indies tour. The squad was largely inexperienced. India won the Test series, but Kohli was dropped from the squad since he wanted against the fast bowling. He was recalled back to the team later that year for four-match series against England but did not play any games in the match. However, Kohli managed to make his mark in the Test cricket. During the December 2011 tour of Australia, despite the National team’s loss, Kohli became the highest scoring player.

In 2012, Virat Kohli was appointed the vice-captain for the national team. The team went to Asia Cup in Bangladesh, where Kohli again showed his excellence. In a match against Pakistan, Kohli scored 183 goals, making it the highest individual score against Pakistan in ODIs. In 2014, Kohli was named the captain of the Indian test squad. On the tour in Australia the same year, Kohli amassed a total of 692 runs- the highest score by any Indian batsman in Test series.
In 2015, Kohli experienced a temporary slump in his career. He wasn’t able to make any big scores, but the following year he got back in his shape. He became the fastest batsman in the world and made 1,000 runs in T20i cricket during South Africa’s tour.

Virat Kohli is the head of the Virat Kohli Foundation. The foundation helps underprivileged children.

Virat Kohli has been in a relationship with Bollywood actress Anushka Sharma. The couple reportedly broke up in 2016, but have moved past their differences and are back together. His estimated net worth is $ 15 million.