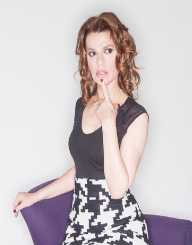 Actress, comedian, and entertainer Sandra Bernhard was born on the 6 June 1955 in Flint, Michigan to Jeanette LaZebnik and Jerome Bernhard. The couple had four children, and Sandra was their only daughter. When Bernhard was a child, her family relocated to Arizona.

She attended Saguaro High School in Scottsdale, Arizona (class of 1973).

Worked in comedy during the 1970s as part of The Comedy Store as well as The Richard Pryor Show. She had a career breakthrough with The King of Comedy (1983).

During the 1980s Sandra Bernhard had her own show, I’m Your Woman, and she continued doing stand-up comedy. In 1989 her one-woman show, Without You I’m Not Much Better launched (1988), and the show was adapted for film in 1990.

She was then cast in the role of Nancy Bartlett in Roseanne (1991-1997). During the 1990s she released the alum Excuses for Bad Behavior and guest starred on various shows including Will & Grace. Other work includes the show Everything Bad & Beautiful (2006), Plan B from Outer Space.

Sandra Bernhard has won include the National Society of Film Critics, Award for Best Supporting Actress (1984) for The King of Comedy (1982). She was also awarded the 2006 Artistic Achievement Award at the Philadelphia International Gay & Lesbian Film Festival and in 2017 won a Gracie Award for her radio show, Sandyland.

Sandra Bernhard has been in a long-term relationship with Sara Switzer. She has one daughter, born in 1998.