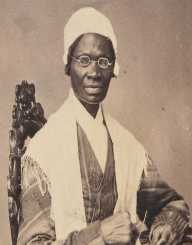 Perhaps one of the darkest sides of world history, slavery, was around not that long ago. With atrocities which many of us barely believe possible, it haunted many countries. Sojourner Truth saw the worst of the wicked creation of a supremacist’s mindset. She served under several masters, suffering cruelty and abuse. Her story received a positive spin, however, and she became one of America’s most recognizable abolitionists.

Her real name was Isabella Baumfree, and she was born in 1797, in Ulster County, New York. Her parents, James and Elizabeth, were both slaves and the family was a numerous one. Her early years were spent in a military man’s estate as a slave girl until she was sold at an auction. Her new owner, John Neely, bought her for 100$. Isabella was not worth this sum herself: a flock of sheep added to the price. Neely was harsh, abusing the young slave. In a twisted way, she was lucky to have been sold several more times. Her last owner was John Dumont, who lived in West Park, New York.

John Dumont, in the wake of abolition in the state, eventually promised Isabella her freedom. He did not keep his promise, however, making up an excuse. This led to her escaping her owner. During her slavery under Dumont, Isabella married and gave birth to five children. She left four of them behind, taking only her baby daughter. They escaped to New York, taking refuge in a family of Dutch descent, the Van Wagenen’s. The family protected her and even “bought her away” from John Dumont, who eventually sought her out.

In 1827, the Anti-Slavery Law was enforced, and Isabelle was legally free. This was the beginning of a spectacular set of changes for Isabelle. Her stay at the Dutch family influenced her to become Christian. She was a firm and passionate defender of Christian values, namely the values of freedom and equality. The following five years saw her work for two separate Christian preachers. Her stay with them made her further embrace the religion. She even changed her name to Sojourner Truth. She chose the latter as a worthy name for her preaching. Sojourner fervently spoke of the fight against slavery.

Words as a Weapon

Continuing her cause, Sojourner Truth joined the Northampton Association of Education and Industry. The latter was an influential abolitionist organization. In 1851, as a member of the organization, she delivered her most famous speech. The speech would be remembered as “Ain’t I a woman?”. It was aimed at the wrong but persistent mistreatment of African-American women in America.

The American Civil War was the clash of the two ideas which ruled the US at the time: slavery and the abolition of slavery. It was only logical for Sojourner Truth to join the latter. She helped the cause by encouraging African-Americans to join the cause. Her efforts in supplying food for the soldiers were also substantial. After the war ended, she never ceased to preach the ideas of freedom and equality. Her lifetime deeds and especially the involvement in the struggle against slavery won her an audience with Abraham Lincoln himself. She died on November 26, 1883, leaving behind a large legacy of battling a world of injustice.