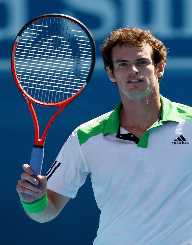 Andy Murray was christened Andrew Barron Murray at birth. He was born in Dunblane in the Scottish city of Glasgow on the 15th day of May 1987. His father was William Murray, and his mother was Judy Murray. His mother was a former sports driven tennis player and also showed his kids the rubrics of the game as they grew up. Andy came from a sports-loving family. His grandfather was a professional footballer.

Andy had a close shave with death when he was just eight years old as an armed man stormed his school and carried out a mass shooting. The armed man was later identified as Thomas Hamilton. Any Murray was able to survive the onslaught because he ran and took refuge in the school principal’s office.

In the history of the Davis Cup, Andy Murray is recorded as the youngest player out of Britain to feature in the tourney.
Andy was able to make his debut in the year 2015 as a Pro, and he came under the tutelage of Brad Gilbert in the year 2006.

As Andy Murray matured in the ball-hitting trade, he was paired against the acclaimed Roger Federer at the Cincinnati Masters tourney, and he upended the bookies by winning the fixture. This was in the Round 2 of the tennis tournament. The world took note of Andy's focus on his strengths for beating the top-ranked seed. In the year, Andy Murray reprised his giant-killing form against Andy Roddick, and this led him to clinch the SAP Open as the very first ATP honors he was securing his career.

To make his way up as one of the best-ranked tennis players in pole position for the year, Andy also won the Open at St Petersburg. At the turn of 2008, Andy defeated Rafael Nadal, who was making waves at the time to berth at the finals of the U.S Open. He was not successful at the finals this time.

A Line-up Of Firsts

Andy Murray made it to the Wimbledon finals in 2012 after defeating the hard-fighting Jo-Wilfried Tsonga in the semi-final pairing. This was one victory that made the Britons proud and the same resounded in Scotland. Andy lost the finals to the in-form Roger Federer, but Andy had already set a record with his advancement to the finals.

As the 2012 Olympics came by, Andy was focussed and hard-fighting and was able to avenge his loss at Wimbledon by defeating Federer this time. He clinched his first gold medal at the Olympics, and it was a sweet victory for him.
The U.S Open was his next triumphing ground in the year 2012 when in September; he crushed Novak Djokovic to clinch this enviable Grand Slam diadem. This became a British record as no one from his record had the finals since the year 1977. Also, none of his countrymen had won any Grand Slam finals since 1936.

As 2013 set in, Andy Murray was at the Australian Open, but he lost to Nova Djokovic. Nothing detracted from the loss as moved on to win the 2013 finals of the Wimbledon’s men’s singles event. He set a record as the second Scot to win this title. He also set a British record as the first in 77 years to win the grand slam. Andy Murray also set another record in the year 2016 as he became the first Brit to reach the finals of the French Open after the last time in the year 1937. Murray lost the final pairing to Djokovic.

Andy Murray was in the public eye in 1999 when he came out tops at the Orange Bowl youth-grade Tennis Open in the American state of Florida. As the BBC took the count for the nominations for Young Sports Personality of the Year, Andy also was the cynosure of all eyes.Murry did not disappoint as he was named the winner in 2003.

Andy moved on to the pole position as Number 1 after the 2004 win he recorded at the U.S Open. Andy also emerged as the overall Sports Personality of the Year by BBC in the year 2016.He has won the latter award thrice in his lifetime.

Andy Murray had to undergo surgery on his back in the year 2013, and these were after his unsuccessful run in the U.S Open. After his clinical schedules, Murry returned to the sport and hired a lady, Amelie Mauresmo to coach him. This lady was a former tennis champion in the women events. Andy Murray made it to the finals of the Australian Open in the year 2015, and this was for the fourth time he was at the last fixture in the tournament. Andy also recorded a win at the Miami Open during the year to chalk up the 500th career win in his competitive playing years.

Andy Murray was able to beat Jo Wilfried-Tsonga again in 2016 at the semi-final pairing at Wimbledon. Murry still came out tops at the last match of the tournament to clinch his third title in the Grand Slam.

Andy Murray got married in the year 2015 to Kim Sears. Kim is dubbed as the lady with evident long –brown hair. She had a string of As in her A-levels in arts, drama, music before going to study at the University of Sussex. When they welcomed their daughter in February 2016, Murry became a father for the first time. This was a personal record he savored and relished in like other great minds. The couple makes their home in Surrey Hills in Surrey, UK, where they live with their two dogs.