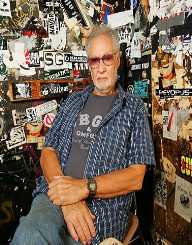 Hilly Kristal was born as Hillel Kristal on September 23, 1931, in the city of New York. The son of Russian immigrants to the US, he was born during the Great Depression. His parents were Shamai and Bertha Kristal. He grew up in a rural chicken farm in Hightstown in New Jersey. He became interested in music and learned to play the violin from an early age. He went to study music at the Settlement Music School based in Philadelphia.

After graduating from the music school, he enlisted into the US Marine Corps. Kristal was stationed in North Carolina’s Cherry Point airbase. He served in the entertainment division of the Marines special services. As a musician, he worked with his friend Dick Joseph to entertain people on the WCPR radio station. Apart from entertainment, Kristal performed other duties like news anchoring, and hosting shows.

Kristal returned to New York after his discharge from the military. He joined the Radio City Music Hall as part of the men’s choral choir. He learned other musical instruments like the piano and guitar to facilitate his own compositions. As a result, he started getting invitations in other entertainment venues within and outside New York. He captured the interest of Atlantic Records who offered him a recording contract. Kristal rejected the offer and opted to sign with another entity, the Independent label. Kristal did four songs at the label before it closed down unsettling a promising career for the singer.

He had a brief musical relationship with Otis Blackwell. Blackwell became famous as the songwriter for the legendary singer Elvis Presley. Kristal produced a few songs with Blackwell. He even featured Presley in one of his songs Mad Mordecai. Kristal recorded the song Everybody’s Buddy, a song written by Blackwell. Like all of Presley’s songs, Kristal had commercial success with the song. He became the only musician to share a music composer with Presley.

In the early 1960s, Kristal turned his eyes on managing the jazz club Village Vanguard. He enlisted the services of jazz musicians like Miles Davis, John Coltrane, and Lenny Bruce. While managing the club, he got a commission to help the US automobile giant Ford market its new brand, Ford Mustang. He went on a tour with Ford’s president Lee Iacocca and other musicians. The Ford Music Caravan comprised jazz as well as country music singers like Roger Miller, Kristal, Herbie Mann, and Nina Simone. They toured several cities across the US.

He teamed up with Ron Delsener in 1969 and created the Rheingold Central Music Park in New York. The Park held annual music concerts until 1976. It featured an array of music legends during its active days like Led Zeppelin, Ray Charles, Bob Marley, and Bruce Springsteen. Kristal left Delsener with the daily running of the park in 1968. He started another entity in New York called Hilly’s. This was a bar and restaurant where patrons enjoyed live musical entertainment over the weekends. Situated on the 62 West 9th Street, the place became popular with patrons in New York. In 1970, Kristal opened another Hilly’s restaurant on the Bowery 13th Street and named it Hilly’s on Bowery. He enlisted the entertainment of country musicians to entertain the clients. The venture on Bowery wound up after a few years.

In December 1973, he created the CBGB and OMFUG. The club name stood for Country, BlueGrass, Blues and Other Music For Uplifting Gormandizers. As the years went by, revelers simply called it CBGB. Kristal encouraged originality in all the musicians that performed at the club. During the first year, he enlisted the services of a few bands. After one year, the popularity of the club as the birthplace of young talents in music grew. The club became the launching pad of Punk rock music. Kristal allowed the musicians to explore their immense talent and expressions without limits. Soon, CBGB became a common name in New York.

Several unknown band and musicians made their name at the club. Kristal helped the rise of musicians like Ramones, Patti Smith, and Blondie. He equally helped bands like Talking Heads, Dead Boys, and The Shirts. As a major entertainment place in New York, Kristal became known worldwide. His fame grew in Britain, Germany, Holland and as far as Japan knew of the club CBGB and the owner Kristal. Kristal ventured into the sale of merchandise to increase his earnings from the club. He sold branded t-shirts and caps.

For 33 years, CBGB entertained the people of New York and its visitors. In 2006, the club closed down. Kristal had a personal disagreement with the owner of the premise. The owner refused to renew the lease agreement. Kristal contemplated relocating the club to Las Vegas but later rescinded the idea.

Kristal married his wife Karen in 1951 and had two children Mark and Lisa.

Hilly Kristal died on August 28, 2007, of lung cancer in New York. In October 2013, a film titled CBGB premiered in the US. It serialized the life of Kristal and the creation of the club CBGB.