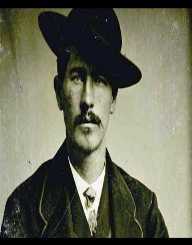 Doc Holliday was a legendary personality from the Wild West, and an icon. He is most known for the bloody gunfight at the O.K. Corral, which also involved Wyatt Earp, another famous gunman.

Doc Holliday was born on August 14, 1851. His star sign was Leo, and his birthplace was Griffin, Georgia. His real name was John Henry Holliday, son of Henry Burroughs and Alice Jane Holliday. Doc Holliday had an elder sister who died as an infant. Doc’s father worked in the medical industry.

As a child, Holliday stuttered while speaking. His mother worked tirelessly to help him improve his condition. She passed away in 1866, due to tuberculosis.

Doc Holliday learned Science as a child. He enrolled at the University of Pennsylvania, where he graduated as a dentist in 1872.

Doc Holliday began his career as a dentist immediately after graduation. He then shifted to Dallas, Texas after contracting tuberculosis – as the weather there was better for TB patients. Doc Holliday soon found himself enjoying the nightlife of Dallas and started drinking and gambling. He played cards and was often involved in brawls at the bars.

During one of these brawls, he reportedly killed a man and escaped Dallas after he was charged with murder. He settled in Dodge City, Kansas – home to gunslingers. He also met his friend Wyatt Earp for the first time here. They shifted to Tombstone, Arizona with Doc having a reputation as a great gunfighter.

Life in the Wild West

Doc Holliday along with the Earps became famous for a gruesome gun battle that happened at the O.K. Corral. They fought with cowboys Billy Clanton & Ike Clanton and their gang. The fight took place on October 26, 1881. In the aftermath three members of the Claytons’ gang were dead, and several men were injured. Doc Holliday was arrested for murder along with Wyatt Earp. However, all charges were dropped shortly. This might have to do with Wyatt Earp being a deputy, and also because the Claytons were infamous for their notoriety. The fight didn’t end there, however. Instead, it led to a bloody history of murders from both the sides. Earp went on a killing spree to avenge his brother and many men on the Claytons’ side were killed.

After this series of incidents, Doc Holliday moved to Denver. He was arrested there but later released after intervention from Wyatt Earp. Doc Holliday then went further into Colorado and spent the rest of his life there.

Holliday’s tuberculosis had become serious. He was divorced from his wife Big Nose Kate Horony by then. He passed away on November 8, 1887, due to tuberculosis. He was 36 years old at the time. Despite his infamy, he was celebrated as a legend, and his legacy lives till today.

Doc Holliday was praised for his Southern manners and humble nature despite being a deadly gunslinger; he was a good companion to his friends. Several films such as the Tombstone have been made about his life and adventures.