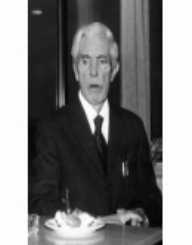 Trygve Haavelmo was highly known as a fervent economist and a promising professor who garnered a Nobel Prize in the 1980s. It was concluded that he became the first economist to have won a Nobel Prize for essaying econometric statistical methods. In his theories; Trygve presented an advanced and innovative technique in the field of the economy with the help of scientific facts and figures. His works paved the way for new areas of research that simplified the study of economics.

In the course of his career, Trygve Haavelmo was more than determined to achieve his end goals. He seemed to have a relaxed and composed personality, but he worked extra hard to meet his expectations. He hated to get along with people who didn’t aspire to greater heights. Unless you crossed his path, Trygve employed an ethical and quiet trait. Besides he was also known for his amicable teaching skills that he continued to influence other economists. He was considered as a role model for not only motivating his students but his development in financial industry.

Trygve Haavelmo was a crème de la crème when it came to planning as well as coming up with alternative options. His high-end energy and excellent communicative skills fared well with his profession. In everything he did, Haavelmo wasn’t motivated by fame or wealth, but he was cautious when it came to forming his discoverers. This explains why he didn’t approve an award as a Nobel Prize holder in the 1980s.

On December 13, 1911, Trygve Magnus Haavelmo was first seen in the world in Skedsmo, Norway. Before joining the University of Oslo in 1930, Haavelmo attended a local primary school for his early education. It was in Oslo that he received his first degree in the field of economics. With the help of a Norwegian economist, Ragnar Frisch Trygve enrolled at Frisch’s Institute of Economics. It was here that he landed his first job as Ragnar’s assistant.

In 1935 Trygve Haavelmo was hired as an assistant researcher from the same institute. In 1936 he went to London University where he studied statistics with other statisticians including Jerzy Neyman. From 1936 to 1938 he went on a study tour in Berlin.

In 1979 Trygve Haavelmo went to the University of Oslo where he served as a professor. It was here that he majored in economic theory and later published a book on the same field. The book A Study in the Theory of Economic Evolution is still regarded as one of the compelling and advanced books. He is majorly known for identifying complex economic arithmetics and in-depth analysis.

Before joining the University of Olso, Haavelmo worked in a research department at Cowles Commission. The Ministry of Finance employed him. Early in 1960, he published another book A Study in the Theory of Investment. Both of his works raised him higher credibility’s.

At the end of WWII, Trygve Haavelmo left his native land where he wrote his third highest degree dissertation: The Probability Approach in Econometrics. He delivered it at the Harvard University in the 1940s. Although he had already released two other doctorates from the University of Oslo, his first branch of economics was published in 1944.

Trygve Haavelmo continued to teach at the University of Chicago, but he returned to his native home in 1947. He announced his retirement in 1979 but he continued to act as retaining professor. Trygve’s econometric introduction paved the way for more predictions in the study of economics.

As a trivia, Trygve Haavelmo didn’t like the idea of winning any prize. Instead of popping an Italian wine with his friends; he went for a walk in the nearby forest. He breathed his last on 28th July 1999 in Norway.