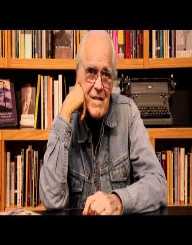 American poet David Russell Wagoner was born in Massillon, Ohio on the 5 June 1926. In 1933 the family settled in Whiting, Indiana where his father Walter Wagoner worked in a steel mill. His mother Ruth Banyard was a musician and singer.

Wagoner started expressing himself in writing around the age of ten or eleven, and he was also a voracious reader from a young age. Other interests as a young boy magic tricks and theatre. At a high school, he played in the football and basketball teams, and he later went to university on a partial accelerated Naval ROTC programme.

After graduating from high school, David Russell Wagoner was a student at Pennsylvania State University where he did a BA in literature (1947), receiving an MA in English from Indiana University (1949).

After meeting Theodore Roethke Wagoner decided that upon a career as a poet and English teacher at a college level.

He was steadily writing at this stage. His experience of growing up in a highly industrialized town was reflected in his early work with original themes including family ties, industry, pollution, the urban environment and ethnic neighborhoods.

Wagoner initially took up an academic lecturing post at DePauw University in Greencastle, Indiana in 1949. Then in 1950, he joined Pennsylvania State University.

In 1953 David Russell Wagoner published his first poetry collection: Dry Sun, Dry Wind. His novel The Man in the Middle was published in 1954. Also in 1954, he was appointed an associate professor of English at the University of Washington in Seattle, Washington State. His mentor, Theodore Roethke (b.1908-d.1963) was instrumental in him gaining the position.

Further published work included the novels Money, Money, Money (1955), A Place to Stand (1958) with Poems (1959) and The Nesting Ground in 1963. His new environment in the Pacific Northwest was reflected in his work during this period.In 1965 The Escape Artist was published. This novel, which focused on a young amateur magician, was a success and firmly established him as a writer.

Towards the end of the seventies, Wagoner replaced Robert Lowell as the Chancellor of the Academy of American Poets (1978-1999). He was appointed Professor Emeritus at the University of Washington in 2002.

David Russell Wagoner has published many poetry collections as well as ten novels. His work includes After the Point of No Return (2012). Good Morning and Good Night (2005), The House of Song (2002), Traveling Light: Collected and New Poems (1999), Walt Whitman Bathing (1996), Through The Forest: New and Selected.

Awards Wagoner has won the Ruth Lilly Poetry Prize, the Pushcart Prize (twice) and the Academy of Arts and Letters Award. David Russell Wagoner has also been nominated for the National Book Award on two occasions. He has also won the Sherwood Anderson Foundation Award for his fiction.

David Russell Wagoner has been married three times. His third wife is Robin Seyfried, and they had two daughters together.