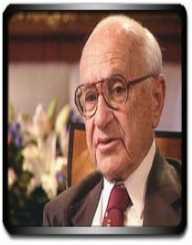 Economist Milton Friedman was born on the 30th July 1912 in Brooklyn, New York City. Friedman's parents were born in the Carpatho-Ruthenia region of what is today the Ukraine. They emigrated individually as teenagers, then met and married in New York City. When he was a toddler Friedman's parents moved to Rahway, NJ. His mother worked in a small retail store. His father worked hard at various jobs and money was often in short supply, although Friedman later recalled that his family life was happy and never in serious want of anything. He had two older sisters.

Milton Friedman graduated from Rahway High School in 1928. His father died in his senior year of school. After winning a competitive scholarship, Friedman financed his studies with summer jobs and as well as various jobs working as a waiter and in retail.

At University, he specialized in mathematics, to becoming an actuary. Milton Friedman became interested in economics and decided to major in both mathematics and economics. He graduated from university in 1932. In 1933, he did a Masters of Arts degree at the University of Chicago and followed that up with spending the 1934 academic year as a fellow at Columbia University, studying under statistician Harold Hotelling. In 1935, he returned to the University of Chicago.

Milton Friedman was awarded a doctorate in economics from the University of Chicago in 1946.

One of his first positions was working for the National Bureau of Economic Research where he was involved in research relating to income distribution. During the 1930s Milton Friedman held various government positions, and in 1940, he was appointed as a lecturer at the University of Chicago, teaching economic theory. He would remain at the university for thirty years. During this time, he obtained his doctorate (1946) and also helped establish a group of economic intellectuals, the Chicago School of Economics.

The American Economists Association presented Milton Friedman with the prestigious John Bates Clark Medal in 1951. (An annual award presented to an American economist under the age of forty who has made a significant contribution to economic thought.)

Milton Friedman came to public attention with his Theory of the Consumption Function (1957). The idea behind his thinking was that consumption and savings decisions are influenced by the permanent change to income; as opposed to short-term changes. His thesis argued that short-term tax increases decreased saving and stalled consumption levels.

Milton Friedman challenged the Keynesian view of economics. Keynesian economics states that fiscal policy should prevail over monetary policy, and that government spending should neutralize the inherent volatility of the business cycle. Milton Friedman offered a different view and proposed his theory of free-market monetarism. He argued the importance of monetary policy, showing that changes in the money supply provide both long-term and short-term effects. He also showed how the money supply relates to price levels. He used monetarism to argue against the Keynesian principles of the multiplier as well as the Phillips curve. The Phillips curve is a theory which shows an inverse relationship between inflation and employment.

Milton Friedman was a prolific writer and published many books and papers. Some his books include Monetary vs. Fiscal Policy (1969). A Monetary History of the United States, 1867-1960 co-written with Anna Jacobson Schwartz (1971) and the bestseller Free to Choose, co-written with his wife Rose D Friedman.

The American Economists Association presented Milton Friedman with the prestigious John Bates Clark Medal in 1951. In 1976, Friedman won the Nobel Prize in Economics. The Nobel prize was in recognition of his work in macroeconomics including his contribution to consumption analysis, monetary history, and monetary stabilization policy. In 1988, he was awarded the National Medal of Science as well as the Presidential Medal of Freedom.

Milton Friedman met and married fellow economics student Rose Director during his university years, and they remained together into old age. Rose Director Friedman co-wrote two books with her husband. Free to Choose and Tyranny of the Status Quo. They also co-wrote a memoir: Milton and Rose D Friedman, Two Lucky People (1998). Rose D Friedman also was a co-producer on the PBS television series, Free to Choose.

The couple had two children. A son David, and a daughter, Julie.

Milton Friedman was a senior research fellow at the Hoover Institution, Stanford University, and the Paul Snowden Distinguished Service Professor Emeritus of Economics at the University of Chicago.

Milton Friedman was of the Jewish faith.