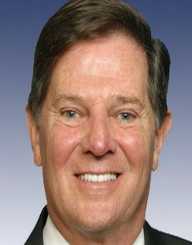 Thomas Dale DeLay was born on April 8, 1947, at Laredo, Texas, US. He is a politician. He is Republican

Tom DeLay was born to the couple Maxine Evelyn (nee Wimbish) and Charles Ray DeLay. He was brought up in Venezuela

Tom DeLay studied at the Calallen High School in Corpus Christi, Texas. During his school days, he was interested in playing football and dancing. He joined the Baylor University for two years but was debarred for anti-school activity. DeLay obtained his Bachelor of Science degree in biology from the University of Houston in 1970.

Tom DeLay worked for three years at Redwood Chemicals, pesticide manufacturer. He acquired Albo Pest Control and became a successful businessman. He was nicknamed the Exterminator. He ran the business for 11 years. He objected to the banning of a particular pesticide by the government.

Tom DeLay became a member of the Texas House of Representatives in 1978. DeLay was elected to the Congress as a Republican from Texas in 1984. He won the seat ten times.

He disapproved the National Endowment for the Arts and the Environmental Protection Agency. He was assigned the work of House Committees and later to the House Appropriations Committee until he assumed as Majority Leader in 2003. He was the chairman of the House Republican Study Committee. He was the whip in 1988.

DeLay was elected as Majority Whip in 1995 against the wishes of the Speaker-elect Newt Gingrich. There was no understanding between House Majority Leader during 1995 to 2003.

In 1998, Tom DeLay tried his best that the House vote for impeachment of President Bill Clinton. In 1999, DeLay became the House Majority Whip. In 2003, he was nominated as Majority Leader. He served in this capacity for two years and resigned.

In 2004, he got a reprimand from the House Ethics Committee over the Medicare bill.

He was accused of financial abuse in 2005 and collusion charges. DeLay was detained in Huston. He stepped down from the position of House Majority Leader. In 2006, he left the Congress. However, the trial continued. In 2010, DeLay was found guilty and sentenced for three years imprisonment. He appealed in the higher court in 2012. In 2014, DeLay was acquitted.

In 1999, DeLay was scolded by the House Ethics Committee over the Intellectual property rights bill.

Tom DeLay was an opponent of Fidel Castro’s administration. In 2005, he visited Israel and seen smoking a Cuban cigar. At that time smoking, Cuban cigar was prohibited in the US. This incidence led the US to ban Cuban smoking cigar by US citizens across the globe. During the presidency of Obama, this prohibition was partially modified in 2016.

He was again accused of inappropriate use of FAA funds and reprimanded by the House Ethics Committee.

DeLay was involved in the Terri Schiavo case, accused of encouraging violence, perjury, Jack Abramoff scandal, and many other controversial matters There were many opinions for and against DeLay.

Tom DeLay supported the Israel administration. He objected to aid for Palestine in 2005. He advocated trade restrictions to Cuba.

Tom DeLay authored a political memoir “No Retreat, No Surrender: One American’s Flight.” He appeared on ABC television reality show.

Tom DeLay married Christine Furrh, a high school friend in 1967. The couple had a daughter, Danielle. She is now a mathematics teacher in a public school.

He was an addict to alcohol. In 1985, he gave up drinking on the advice of Rev. Ken Wilde. He was estranged from his mother and one of his brothers, Randy.