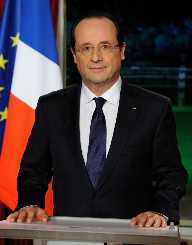 Francois Hollande was born on August 12, 1954, at Rouen. His father Georges Gustave Hollande, a doctor with ENT specialisation and mother, Frederique Tibert was a social worker.

The family moved to Neuilly-Sur-Seine when Hollande was thirteen years. He attended boarding and private schools in Rouen. He graduated with a bachelor’s degree in law.  He studied at HEC, (a business School)  Paris and ENA (national school of education) and graduated in 1975 and 1980 respectively.

Hollande lived in the US in the summer of 1974 as a university student and was a councillor.

Francois Hollande, as a student, volunteered to work for Francois Mitterrand in his presidential election campaign in 1974. Then he joined the Socialistic Party. He unsuccessfully tried the election to the legislature in 1981.

He became a special advisor to President Mitterrand. He also served as a staffer to Max Gallo, a government’s spokesperson. In 1983 Hollande became a councillor and again contested for the second time in 1988 and was elected to the National Assembly. He lost the next election to the assembly in 1993.

Internal factions were severe in the Socialist Party, each party trying to gain control. Francois Hollande offered mediation between different groups and pleaded for reconciliation under the leadership of President of European Commission. Hollande was selected the official Spokesperson of the Socialist Party. Hollande returned to the National Assembly after being elected in 1997.

Hollande’s domestic partner, Segotene Royal, was chosen to represent the party in the 2007 presidential election and she lost to Nicolas Sarkozy. Hollande did not seek another term as First Secretary but declared his support to Bertrand Delanoe, the Mayor of Paris. Bertrand lost the election.

Hollande was elected as President of General Council of Correze in 2008 and re-elected in 2011.

His earlier opponents extended their support in the General Election. Hollande’s campaign was managed by Pierre Moscovic and Stephine Le Foll, a member of Parliament and Member of European Parliament respectively. Hollande began his campaign in January 2012.  His speeches stressed equality, regulation of finances, etc.

Francois Hollande also released his election manifesto which included, separation of retail activities from the banking business, more taxes on corporate cos, creating teachers jobs and many more. He detailed his policies on education in Feb.2012.

The incumbent President, Nicolas Sarkozy announced in 2012 that he would run for the second term and lost in the 1st and 2nd round of the opinion poll.

Francois Hollande became the President in May 2012 and appointed Jean-Mare Ayrault as Prime Minister and Benoit Pugas as Military Chief. His council of ministers had 17 men and 17 women.

Hollande initiated his first measure to reduce the salary of President, Prime Minister and other members of the government.

The financial policies were many such as the creation of European credit rating agency, separation of lending and investment banks, reducing the share of electricity generated by nuclear power in France, merging income tax and General Social contribution, creating jobs, enhanced taxes, etc.

Francois Hollande announced reforms in education to create jobs for teachers, study allowances and training. He announced plans to construct houses for the public, reduction in retirement age.

Hollande announced his support for same-sex marriage and Adoption for LGBT (lesbian, gay, bisexual and transgender) couples. This was made Law in May 2013.

Francois Hollande introduced labour reforms bill in May 2913. The bill aimed to make France competitive internationally. The Law provided for change of jobs by workers and firing of workers during financial difficulties. He introduced a measure for credit rating, health insurance, unemployment insurance, etc.

The Parliament passed the Pension Reform Bill in 2013 against much opposition from Public and Labour Unions. The retirement age was not changed.

Francois Hollande visited the US in 2014. Expressed support to Israel’s right to defend 2014

The French Forces were authorised to operate in the north of Mali to oust Islamic militants in Mali. Francois Hollande visited Mali in Feb.2013. He also supported Barkhane fight against jihadist militants.

Francois Hollande had four children from his partnership with Segolene Royal. The couple separated after Royal’s defeat in the French Presidential election in 2007.

Hollande had a relationship with a French journalist Valerie Trierweiler in 2007. She moved to Presidential Palace with Hollande when he became the President. They separated in 2014.

Francois Hollande announced in December 2016 that he is not seeking the second term as President.