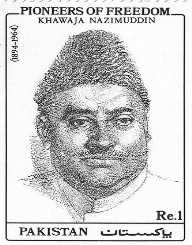 Khawaja Nazimuddin was born on July 19, 1894. He was an East Pakistani. He led the country as the second Prime Minister in the history of Pakistan. He also served as the second Governor General. He was a very humble politician who was loved by many. He was well endowed with both Indian and Western principles as he took his studies in England. He was once the Education Minister as well as the Chief Minister of Bengal. He was also the leader of the Muslim League. He died on October 22, 1964.

Khawaja Nazimuddin was born on July 19, 1894, in Dhaka presently known as Bangladesh. He was born into a very wealthy family. He was born to Nizamuddin and Nawabzadi and Bilquis Bano. He attended the Dunstable Grammar School in Bedfordshire, England for his primary education. For his higher education, he attended the Aligarh Muslim University in Uttar Pradesh. He later joined Trinity Hall College of the University of Cambridge in England.

Khawaja Nazimuddin started his political career in 1922. In that year he became the Chairman of the Dhaka Municipality. He also held a position as the Executive Council of the Dhaka University. He became a member of the Bengal Legislative Assembly from 1923 to 1929. In 1929, he was appointed as the Education Minister of Bengal. As the Education Minister, he passed the Compulsory Primary Education Bill which was made at bringing equal education to both the Muslims and Hindus. He also became a representative of the Governor’s Executive Council in 1929.

In 1934, he was appointed the Minister of finance and in his position he came up with, the Agriculture Debtor’s Bill and the Bengal Rural Development Bill. The Bengal Rural Development Bill sought to stop the oppression of Muslim peasants by Hindu zamindars. In 1935, Khawaja Nazimuddin reorganized the Muslim League to include all Muslim political parties. In 1937, he was appointed as the Home Minister and served for four years under Haq’s Coalition Ministry. However, in the later years there were ideological differences between him and Haq and so he resigned from his position.

In 1943, Khawaja Nazimuddin was named the Chief Minister of Bengal where he really worked hard to take care of the issue of famine that was affecting the region. He also served as the leader of the Muslim League while he was Chief Minister. In 1947, Pakistan was formed and he was made Chief Minister of East Bengal. East Bengal was a new state in Pakistan. After Jinnah died in 1948, he succeeded him as Governor General of Pakistan. In 1951, he became the second Prime Minister of Pakistan after Liaquat. He continued to act as the president of the Muslim League. He also acted as a representative of the Constituent Assembly. In 1953, he was dismissed as Prime Minister because of the rivalry between Punjabi and Bengali populations.

In 1924, Khawaja Nazimuddin married Shah Bano. Shah Bano was the daughter to Khwaja Ashraf. His son also joined the political scene in Pakistan. He died on October 22, 1964. He was buried inside the premises of the Dhaka High Court. He was buried next to Fazlu Haq and Suhrawadi who were respected national leaders.