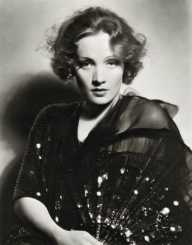 Marlene Dietrich was a symbol of elegance and glamor. Most of the time, she kept developing herself professionally and personally. She was known for her enthralling cabaret dance which was seductive and magical. She was a progressive and highly placed singer that is financially independent. She was seen as a very prolific performer during the second world war. She performed great and wide live shows around the globe.

Marlene Dietrich was born on December 27, 1901, to the family of Wilhelmina Elizabeth Josephine and Louis Erich Otto Dietrich. She was the youngest daughter of the family and was given birth to in Berlin, Germany. Before her father’s death, he was a police lieutenant while her mother belonged to the family of jewelers and clock-maker in Berlin. Her mother later courted Eduard whom she married eventually in 1916. She later adopted the name Marlene at age 11. Marlene Dietrich had schooled at AUguste-Viktoria Girls’ School before she went to Victoria-Luise-Schule to study English and French. She learned more about violin and even ventured into poetry and theater she liked. However, she gave up on becoming a violinist after she had a wrist injury.

Marlene Dietrich had her first job in 1922 as a pit orchestra violinist, and this lasted for four weeks. Later on, she worked with Guido Thielscher in Girl-Kabarett as a chorus girl. She, however, failed an audition in drama academy of Max Reinhardt. However, she was also adopted as a chorus girl in the theater.  In 1923, she made her debut with a small film by playing a small part in the Little Napolean. She later worked in Tragodie der Liebe. She was cast in Germany in the film Der Blaue Engel and the English version. Her sophisticated manner and good looking made her a natural for a role as a nightclub partner. The movie was a hit among Americans and helped make her a star in the United States.

In 1930, Marlene Dietrich moved to America shortly after the premiere of Der Blaue Engel in Berlin. She starred in Morroco. She played Amy Jolly who was a lounge singer who was entangled in a love triangle with a wealthy playboy and a Foreign Legion member. She got an Academy Award nomination for this film. She continued her film career and kept playing the femme fatale in her life. Marlene Dietrich was known to have challenged the accepted notions of feminity. She was known to have always worn pants and masculine fashions rather than feminine clothes. She made several movies with the producers of Von Sternberg, and this includes Dishonored, Scarlet Empress and Shanghai Empress. She later worked with Von Sternberg on The Devil is a Woman. This film was reported to be her favorite movie. She played a cold-hearted temptress who captures several men. Many considered it to be her ultimate portrayal.

Soon, she chose to have softer roles and took lighter fare in her movie career. Marlene Dietrich later worked with John Wayne, who was said to be in a romantic relationship with her. She worked on Seven Sinners, The Spoilers, and Pittsburgh with him. She also starred opposite Jimmy Steward in Destry Rides Again.

Her main work was The Blue Angel in which she was a sensual cabaret dancer. Marlene Dietrich also got her signature song, Falling in Love Again introduced. She later starred in Shanghai Express which was a huge box success.

Marlene Dietrich married Rudolf Sieber on May 17, 1923. Rudolf was the assistant director in Berlin. She gave birth to her only daughter, Maria Elisabeth Sieber on 13th of December 1924. Despite the fact that she married once, she was connected to some affairs throughout her careers. She was known to have affairs with actors Gary Cooper and Stewart. She was also reported to be having an affair with Jean Gabin while she was in a relationship with Erich Maria Remarque. She also boasts to have had affairs with John F. Kennedy, John Wayne, and Bernard Shaw. She died on May 6, 1992, at age 90 after renal failure. She was buried at a Roman Catholic Church, La Madeleine.