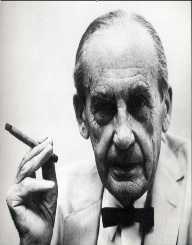 Walter Gropius was born on May 18, 1883. He was a German-American architect. He is one of the pioneers of modern architecture. He is ranked on the same level as other architects such as Ludwig Mies Van der Rohe, Frank Lloyd Wright, and Oscar Niemeyer. Walter Gropius is known for the establishment of the Bauhaus design school in Weimar. The school is famous because of its approach to design and architecture. He also headed the Graduate School of Design at the Harvard University. His works include Harvard Graduate Centre, Boston Gropius House and John F. Kennedy Federal Office Building among other works. He died on July 5, 1969

Walter Gropius was born on May 18, 1883 in Berlin. He was born to Walter Adolph Gropius and Manon Auguste Pauline Scharnweber. His father was an architect as well as his uncle. In 1903, he joined a Technical College in Munich and studied architecture. He studied at the college until 1904. In 1905, he joined a Technical College in Berlin until 1907. He, however, did not receive a Degree from the College. He completed his architectural studies and travelled for a whole year visiting England, Spain, and Italy. After his travelling expedition he joined architecture Peter Behrens who was a co-founder of the German Association ‘Deutscher Werkbund’ to work in his office. Peter was also a member of the modernist school of architecture.

Walter Gropius worked alongside Dietrich Marcks, Ludwig Mies van der Rohe and Le Corbusier. In 1910, he established his own partnership firm with Adolf Meyer. From 1911 to 1913, his firm worked on the Fagus Werk which was a factory in the town of Alfeld, Germany. In 1914, the firm worked on office and factory buildings in Cologne which were made for the German Labour League Exhibition. In 1911, he became a member of the German Labour League. Two years later he was selected to design a car for Prussian Railroad Locomotive Works. The locomotive was the first to be designed in the whole of Europe.

In 1913, Walter Gropius published his article titled ‘The Development Buildings’ which included pictures of factories and grain elevators in North America. This article influenced other modernists such as Erich Mendelsohn and LeCorbusier. In 1914, World War I broke out and it affected his career. He, therefore, went ahead to serve in the army a sergeant and he later climbed up the ranks to lieutenant. He fought in the army for four years before he got seriously wounded and had to leave the army. He was awarded the Iron Cross Award Twice for his involvement in the war.

In 1919, Post World War I, Walter Gropius became master of Grand Ducal Saxon School of Arts and Crafts in Weimar. He became master after the recommendation of Henry Van De Velde who stepped down from the position. He transformed the school into the popularly known and renowned Bauhaus which had excellent teachers such as Joseph Albers, Otto Bartning and Paul Klee among others. Bauhaus presented an opportunity to extend beauty and quality to homes through well designed industrially produced objects. The program collaborated with modernist design movements such as Elementarism by Van Doesburg and Constructivism by El Lissitzky among others.

In 1923, Walter Gropius designed his famous door handles which are currently listed as one of the most influential designs to emerge from Bauhaus. From 1925 to 1932, he designed and developed the school building in Dessau where Bauhaus was shifted to. He continued to design housing projects in Berlin, Karlsruhe and Dessau. He was also involved in designing part of the Siemensstadt project in Berlin. In 1933, Bauhaus was closed because of the Hitler Rule and the Nazi uprising.

In 1934, Walter Gropius fled Germany and went to Italy. He later relocated to Britain where he was associated with the Isokon design group. In 1937, he moved to the United States of America with the help of Helen Storrow. Helen provided him with a portion of her land in Lincoln, Massachusetts where he constructed her home. In 1938, he was inducted in Harvard University as the chairman of the Department of Architecture a post that he held until 1952. In 1944, he officially became a United States citizen.

In 1945, Walter Gropius established ‘The Architects’ Collaborative’ (TAC) which was a Cambridge based association of young architects. The other co-founders included Norman Fletcher, Benjamin Thompson and Robert MacMillan among others. Some of the designs made by Walter and TAC include Harvard Graduate Centre, Cambridge, Pan Am Building, New York, Embassy of the United States, Athens and the John F. Kennedy Federal Office Building in Boston. In 1967, he was elected an associate member in the National Academy of Design. In 1968, he was inducted as an academician.

In 1915, Walter Gropius married Alma Mahler who was the widow of composer and conductor Gustav Mahler. They had a daughter together who died in 1935 after suffering from Polio. The couple divorced in 1920. In 1923, he got married to his second wife Ilse Frank with whom he adopted a daughter, Beate Gropius. He died on July 5, 1969 in Boston Massachusetts at the age of eighty six.