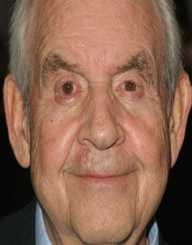 Tom Bosley was born in Chicago in the USA. At birth, he was named Thomas Edward Bosley. His Jewish parents were Benjamin and Dora Bosley. Bosley’s parents separated when he was very young. He was raised by his divorced mother. Despite that, Bosley was brought up in a reasonably stable home.

He graduated from Lake View High School in 1945. Immediately after high school, he enlisted into the US Navy for the WW2. After being discharged from the military, Bosley went back to school. He joined the DePaul University but later transferred to the Radio Institute of Chicago. He graduated in radio production.

After his quest to be a sports presenter failed, Tom Bosley became a radio actor. Bosley made his maiden appearance on stage in 1947, while still in college. His appeared in Our Town, together with the Canterbury Players. The stage play was set at the Fine Arts Theater in Chicago. The performance boosted his resolve to become an actor. He relocated to New York in 1950.

He got his acting apprenticeship at the Actors Studio. Bosley then had his first stage role at the Broadway in 1955. He appeared in the play Thieves Highway. To supplement his meager acting income, Bosley had to do other jobs. He worked at Central Park’s Tavern on a part-time basis. After the tavern, he would go to work at Lindy’s Deli.

His breakthrough came in 1959. Tom Bosley got a leading role in the play, Fiorello. The musical play was staged at the Broadway. His role depicted the New York mayor Fiorello Guardia. The role earned him an award and several accolades from other quarters. The New York Drama Critics were the first to award him for his lead role. The second was the Newspaper Guild.

The Broadway role cast his opportunities wide open. Bosley got numerous invitations from film producers. Later in his career, he played the role of another great American politician. The 1978 production The Bastard, Bosley took the role of US President Benjamin Franklin.

Tom Bosley starred in several Hollywood productions before landing on Happy Days in 1974. His role as Catholic priest Howard Cunningham was well received. The television series ran from 1975 to 1983.

Apart from his divine role in Happy Days, Bosley featured in documentaries as a narrator. One of the documentaries was That’s Hollywood. It aired between 1977 and 1981. His voice was also co-opted in other film productions including cartoons and radio drama episodes for children.

After the curtain fell on Happy Days, Tom Bosley went on to appear on few other productions. Due to increased popularity, Bosley got contracts to do television commercials in the 1980s and 1990s. In his late years, he was the spokesperson of Specialty Merchandise Corporation. His was basically a public relations role. In his entire career spanning over 60 years, Bosley featured in over 50 radio, television, and film production.

Despite his near-perfect roles in Christian priestly functions, Tom Bosley was a practicing Jew. His love for acting made so natural for him to cast anything presented to him.

He was married to his first wife, Jean Eliot. The union lasted from 1962 to 1978. It ended with Jean Eliot’s death. They were blessed with one child. He then married Patricia Carr two years later. She stayed with him until his demise.

He lived with his family at his home in Palm Springs, California.

Thomas Edward Bosley died on October 19, 2010. His death occurred in a California hospital. The official cause of death was given as complications from a bacterial infection. The remains were buried at the Hollywood Hills Cemetery.

During his childhood days, Bosley dreamed of becoming a famed sportsperson. His parents divorced when he was two years. He joined college to study law. Midway in his law school, he decided to drop out. Bosley settled on becoming a sports announcer. At last, he became an actor.

Opportunities in life expose us to making money. The greatest opportunity is not being wealthy, but to discover your talent. Bosley stumbled on his talent later in his life. His natural acting abilities made his roles flawless in both the stage and film setups. That was seen in the number of various productions he was given.