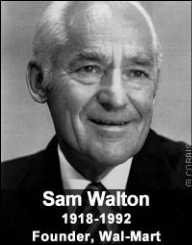 American businessman and entrepreneur, Sam Walton was born on March 29th, 1918.  Famed as one of the most influential individuals of the 20th Century, Sam (born Samuel Moore Walton) is renowned for his business sense as well as becoming one the founding members of one of the largest retail chains in the world.

Sam Walton was born in Kingfisher, Oklahoma and lived on the family farm. The farm was owned by his parents, Thomas Gibson Walton and his mother, Nancy Lee. He lived on the farm until 1923. Due to the Great Depression, Walton's father had to move the family out of the farm and had to travel from city to city while working for his brother. Walton, while attending school in Shelbina, Missouri, became the youngest Eagle Scout in the Missouri State History. In later life, this success was continued when Walton was awarded the Distinguished Eagle Scout Award from the Boy Scouts of America.

As time went on, the Walton family relocated to Columbia, Missouri. Walton was recorded to have been a very helpful child, assisting his family in day to day chores such as milking the family cow and delivering the milk to the family's customers. Frequently, after his days of work, he would set about completing his paper route for the Columbia Daily Tribune. Alongside this, Walton also sold magazine subscriptions. He graduated from David H. Hickman High School. While graduating, Walton was awarded the Most Versatile Boy award.

Upon completion of high school, Walton decided to enrol in college in the hopes of securing a better job to help support his family. He enrolled at the University of Missouri as an ROTC cadet. While in education, Walton was employed in many small-time jobs. The most famous of these jobs was waiting tables at a local restaurant in exchange for meals.

While at college, Sam Walton joined Zeta Phi, a chapter of the Beta Theta Pi fraternity.  Alongside this, Walton was also invited to join the QEBH, a famous secret society based on campus. Additionally, he also joined Scabbard and Blade, the national military honor society. On top of all this, Walton was also elected the president of Burrell Bible Class. In 1940, Walton graduated with a bachelor degree in economics. He was also voted Permanent President of his class.

Three days after graduating from college, Walton, as a management trainee, joined J.C. Penney in Des Moines, Iowa. He was paid $75 a month in this position. After 18 months, Walton resigned, expecting to be called for military service in the ongoing World War II. While awaiting his call to duty, Walton was employed at the DuPont munitions plant in Tulsa, Oklahoma. Shortly after, Walton joined the military, supervising security at POW camps and aircraft plants. He worked these roles under the command of the U.S. Army Intelligence Corps. Walton was based in Salt Lake City, Utah at Fort Douglas.

Sam Walton married Helen Robson on February 14th, 1943. During their marriage, they had four children. These children were Samuel Robson (1944), John Thomas (1946), James Carr (1948) and Alice Louise (1949). In his free time, Walton and Helen were active members of the Bentonville Church of Christ. Walton served as an Elder and as a Sunday School teacher. The Walton family made considerable donations to this congregation over the course of his lifetime.

Walton died on Sunday, April 5th, 1992.  He died of the blood cancer known as multiple myeloma. He was admitted to a hospital in Little Rock, Arkansas. He was cremated, and his remains were delivered to Bentonville Cemetery.

Sam Walton left the military in 1945. From here, he became the manager of his first variety store. With a $20,000 loan from his new father-in-law in addition to the $5,000 he had saved from the Army, Walton invested in a Ben Franklin store in Newport, Arkansas. In three years, Walton had turned sales from $80,000 to $225,000. After some disagreement with the landlord, Walton decided to purchase a new store in downtown Bentonville. The landlord bought the store's inventory at the time for £50,000 and Walton then left. Over the next three years, Walton increased the profits of his new store from $72,000 a year to $175,000.

Over the following years, Walton and his brother, Bud would continue to scout out potential store locations and would log thousands of flight hours over his career. In 1954, Walton and Bud opened a store in a shopping mall in Ruskin Heights, Kansas City, Missouri. From here, Walton continued to open stores, encouraging his managers to run the stores properly by letting them take shares in the business. By 1962, Walton and his brother had opened 16 stores across four states.

Sam Walton opened his first Wal-Mart store on July 2nd, 1962. It was located in Rogers, Arkansas. Walton set about establishing his stores in small towns rather than big cities and worked slowly in logistics. He ensured that stores were not located more than a days drive for Wal-Marts regional warehouses. He also put substantial effort into only buying American made products and using American manufacturers. In 1977, Walton had 190 stores. He rapidly increased this figure to 800 stores by 1985.

In 1998, Sam Walton was featured in the 100 most influential people of the 20th Century, by Time magazine. He was included in this list for his efforts and innovations in the retail industry. He also received the Presidential Medal of Freedom from George W. Bush in March 1992.

Walton was ranked the Richest Person in the United States from the years 1982 to 1988 by Forbes. He only lost this spot when Forbes editors began to credit Walton and his children for the success jointly.

In the University of Arkansas, the Business College is named the Sam M. Walton College of Business in his honor. Walton was also given a place in the Junior Achievement U.S. Business Hall of Fame in 1992.

Since Sam Walton's first store, Wal-Mart now operates throughout the U.S. and in more than 15 international locations.  These locations are:

Wal-Mart went on the public stock exchange in 1970. The first stock was sold at $16.50 per share. Just two years later, the company was listed on the New York Stock Exchange. By 1980, the company had reached $1 billion in annual sales. By the early 1990s, the company sales had rocketed to $45 billion.

Sam Walton stepped down from his CEO position in 1988 but remained an active member of the company until 1992. The company is renowned as the largest private sector employer in the world.

Sam Walton was passionate about giving back to society. He created the Wal-Mart foundation in 1979. This foundation was set up to give opportunities to unprivileged people, giving them sustainability and a sense of community. He was also famous for donating large sums of money to charitable causes and churches.