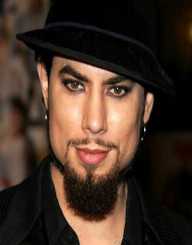 Dave Navarro was born on June 7, 1967, in Santa Monica, California, USA. Sadly, his parents divorced when he was young, so he was primarily raised by his mother. However, he still saw his father on occasion. Once Navarro’s mother was murdered in 1983, Navarro moved in with his father.

As a child, Dave Navarro loved music. He first started taking piano lessons when he was in grade school. Later, when Dave Navarro was in middle school, he began learning how to play the guitar. He started out by playing the acoustic guitar but later moved on to playing the electric guitar.

For Navarro’s high school education, he attended Notre Dame High School. Dave Navarro never graduated, as he was expelled. While in high school, he worked on making a unique music style for himself, while focusing on alternative rock themes. It was high in high school that he met and became friends with Stephen Perkins, who he would later be in a band with.

Dave Navarro first joined the band Jane’s Addiction in 1986 as the band’s new guitarist. Stephan Perkins started this band with Perry Farrell. While in this band, he produced three albums: Jane’s Addiction, Nothing Shocking, Ritual de lo Habitual. The band also went on several tours while Navarro was in the band. He stayed in this band until it broke up in 1991. The band’s breakup was in part due to infighting between the members. During this time, Dave Navarro was doing drugs, which made him irritable (to say the least). Creative differences also contributed to the breakup of the band. Since then, the band has made albums off and on.

Dave Navarro spent several years in between bands. He played as a touring member or a fill-in guitarists for several bands between 1991 and 1994. Some of the bands he played with during this time include Nine Inch Nails and with Alanis Morissette.

Dave Navarro has also been a member of the Red Hot Chili Peppers. He first joined the band in 1994. He stayed in the band until 1998, but he only ever produced one full album with the band: One Hot Minute. Even though he did not formally leave the band until 1998, he was touring with Jane’s Addiction for a reunion tour in 1997.

Jane’s Addiction went on another reunion tour in 2001. Around this same time, the band released another album with Navarro called Strays. In the same year, Dave Navarro released his first solo album called Trust No One. Meanwhile, Navarro stayed with Jane’s addiction until the band broke up again in 2004, for many of the same reasons as they broke up over a decade earlier. Even though the band broke up, they continued to play music together at various parties and concerts. They got together once more in 2011 to release the albums: The Great Escape Artist. The band then went on another tour.

Dave Navarro starred in his first reality show in 2004 called Til’ Death Do Us Part: Carmen and Dave. This show revolved around the plans for the wedding of Navarro and his third wife, Carmen Electra. The show only aired for seven episodes on MTV. The last episode of the show showed Navarro and Electra’s wedding.

Dave Navarro later appeared on the show Rock Star: INXS in 2005. In this show, contestants tried to compete to join the band, INXS. Navarro did not compete, but instead, he hosted the show. He also appeared in another season of the show called Rock Star: Supernova, which aired in 2006.

Dave Navarro is the host of the reality television show, Ink Master. This show aired on Spike. On this show, contestants are challenged to make beautiful tattoos for clients. The show first premiered in 2012 and continued to air as of 2017.

Dave Navarro wrote a memoir about his life as a rock star and reality television star called Don’t Try This At Home, which was released in 2004.