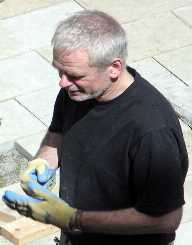 Andy Goldsworthy is an award-winning British environmentalist, sculptor, and photographer. Born on July 26, 1956, he is known for producing site-specific sculpture and land art at its natural and urban setting. Andy Goldsworthy is part of the Environmental Art Movement along with Chris Drury and Richard Long. Inspired by the works of Robert Smithson as well as the1960s and 1970s artists, Andy Goldsworthy crafts his installations out of rocks, branches and ice with the hope that it will change the landscape. Andy Goldsworthy then documents the process and results, photograph and the exhibit them.

Andy Goldsworthy was born on July 26, 1956, to F.Allin Goldsworthy in Cheshire, England, United Kingdom. His father was a professor of applied mathematics at the University of Leeds. Andy Goldsworthy grew up on the Harrogate side of Leeds, in the West Riding of Yorkshire. Andy Goldsworthy began work on the farm as a laborer at age 13, and this inspired his sculpture work. Andy Goldsworthy once said,"A lot of my work is like picking potatoes; you have to get into the rhythm of it." From 1974 to 75, Andy Goldsworthy studied fine art at Bradford College of Arts and continued at the Preston Polytechnic from 1975 to 1978. He graduated with a Bachelor of Arts degree.

Andy Goldsworthy lived in Yorkshire, Lancashire and later Cumbria. Andy Goldsworthy then moved to Langholm, in Dumfries and Galloway, Dumfriesshire, Scotland and later to Penpont. Most of his movement was due to economic reasons and also some way of life Andy Goldsworthy had no control of but also served as a contributing factor to his later works. During this time he received a commission for the work in the entry courtyard of San Francisco De Young Museum known as “Drawn Stone.” This work served as a form of resonance to the frequent earthquakes in San Francisco and its effect. The installations for the work included a giant crack in the pavement that broke off into smaller cracks, and broken limestone, which could be used for benches.

Andy Goldsworthy made the smaller cracks with a hammer. Some of his artistic works include the Sheepfolds in Cumbria, UK, Stone House and the Cairn in Herring Island, Victoria, Australia and the Hutton Roof at the National Museum of Scotland. Others are Stone River in Cantor Art Center, Standford University, Andy Goldsworthy Arch at Goodwood, Chalk Ston Trail, and The Andy Goldsworthy Project among others. Goldsworthy served as an A.D. White Professor-At-Large in Sculpture at Cornell University first from 2000 to 2006 and again from 2006 to 2008.

Andy Goldsworthy mostly uses materials like bright colored flowers, leaves, pinecones, icicles, mud, thorns, twigs, stones and stones for his sculpture work. Andy Goldsworthy once stated that"I think it's incredibly brave to be working with flowers and leaves and petals. But I have to: I can't edit the materials I work with. My remit is to work with nature as a whole." With his works done with stones, Andy Goldsworthy is mostly regarded as the founder of modern rock balancing.

To Goldsworthy, photography plays a vital role in artwork due the since several artworks are short lived. Andy Goldsworthy is quoted to have said, "Each work grows, stays, decays – integral parts of a cycle which the photograph shows at its heights, marking the moment when the work is most alive. There is an intensity about a work at its peak that I hope is expressed in the image. Process and decay are implicit."

Andy Goldsworthy got married to Judith Gregson in 1982. They were blessed with four children. They are divorced now, and Goldsworthy currently lives with his partner Tina Fiske, an art historian.