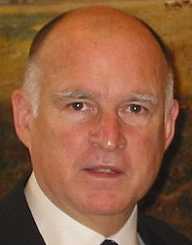 Jerry Brown is an American politician and is best known for his governorship of California.

Jerry Brown was born Edmund Gerald Brown in San Francisco on 7 April 1938. His father, Edmund Gerald Brown (known as Pat) was the district attorney for San Francisco and would go on to be attorney general for the state of California and then to become the state’s governor. His mother was Bernie Layne Brown. Brown attended St. Ignatius High School and was a member of the paramilitary youth group the California Cadet Corp. After graduation, Brown intended to become a Catholic priest and studied at the Jesuit novice house, Sacred Heart Novitiate. He stayed three years as a Jesuit novice before moving to the University of California to study Classics. He studied law at Yale and graduated in 1964. Brown began working as a law clerk before passing the bar in California.

Jerry Brown was elected as the Secretary of State of California in 1970. His term was marked by a series of cases against political campaign contributors who had broken donation laws. Brown also investigated President Richard Nixon for falsifying tax documents. Brown drafted the California Political Reform Act of 1974. Brown ran for the governorship of California in 1974. In the Democratic primary he faced some an experienced field, his most notable opponents were the mayor of San Francisco Joseph Alioto and the speaker of the assembly of California Bob Moretti. Brown enjoyed great name recognition as his father was remembered fondly by Democrats for his time as governor. Brown won the Democratic nomination, securing nearly twice as many votes as his nearest challenger. In the election, he faced the Republican nominee, Houston I. Flournoy. In the election, Brown secured over fifty percent of the vote as he won the key cities of San Francisco, Sacramento and Los Angeles. Brown succeeded future U.S President Ronald Regan as governor.

Jerry Brown eschewed many of the trappings of office as governor. He refused to live in the newly built governor’s residence and would often walk to work rather than use a limousine. Brown oversaw the most massive budget surplus in state history as the state made five billion dollars more than it spent. Brown followed an active environmental policy and cracked down on subsidies to the oil industry. He also increased funding for the arts by thirteen hundred percent. Brown opposed the death penalty and would veto it. Brown played a key part in saving local governments after Proposition 13 cut the property tax efficiently slashing local government’s main income source.

Brown used the state budget surplus to maintain the standard of services in areas under local government jurisdiction. Brown received praise for his work but was criticized for some by making Proposition 13 seem less harmful. Brown stood as a candidate in the primaries for the Democratic Presidential nomination. Brown won California, Nevada, and Maryland, but Jimmy Carter was nominated on the first ballot. In 1978, Brown defeated Californian state Attorney GeneralEvelle J. Younger to remain governor of California by 1.3 million votes.

Brown worked for LGBT equality he appointed five openly gay judges during his time as governor including the first gay judge in America, Stephen Lachs, and the first lesbian judge in America, Mary C. Morgan. Brown again sought the Democratic nomination for president in 1980. Brown attracted fringe support in particular environmentalists; he was, however, overshadowed by better-known candidates Ted Kennedy and incumbent Jimmy Carter. He was unable to develop any momentum and was easily defeated. The biggest controversy as governor came in 1981 as a medfly infestation destroyed millions of dollars worth of crops.

Brown initially resisted calls to allow airborne spraying but eventually allowed it as the infestation worsened. Many people later claimed that the spray was dangerous to humans and also that it stripped car paint. Brown did not seek re-election in 1982. Instead, he ran for the U.S Senate. He was defeated by his Republican opponent Pete Wilson, who fifty two percent of the vote versus Brown’s forty-five percent.

With his defeat in the 1982 Senate Elections, many dismissed Brown’s career over. He took the time out of an office to travel. Jerry Brown studied Buddhism in Japan and visited Mother Theresa in India. He became the chairman of the Democratic Party in California in 1988 but resigned in 1991. He then stood for the Senate again only to withdraw his candidacy, while leading in the polls, to seek the Democratic nomination for president in the 1992 election. Brown ran on an anti-corruption platform and refused to accept major donations instead focussing on small donations from the masses.

Brown outflanked his opponents on the left and the right with his tax policies and won the states of Connecticut and Colorado. His small budget meant that Brown was not taken seriously by other candidates until it was only him Paul Tsongas, Massachusetts Senator, and Bill Clinton, Governor of Arkansas, left in the race. Brown’s campaign, however, imploded when he stated he would consider Jesse Jackson as a running mate. The Jewish community despised Jackson and Brown suffered a heavy defeat in New York. Brown won seven states and enjoyed the best money spent to votes ratio.

Brown won enough delegates to deny Clinton a first ballot victory but was ultimately defeated.In 1995, Brown was elected mayor of Oakland. Brown was successful in revitalizing Oakland’s economy and population numbers but did not enjoy the same success in schooling and crime. Brown won landslide victories in the Democratic nomination and the Attorney General of California elections in 2006.

Return As Governor Of California

Jerry Brown again ran for the governorship of California in 2010. Incredibly negative campaigning marked the campaign by Brown and his opponent Meg Whitman. Brown was heavily outspent but defeated his opponent by nearly fourteen percent. Brown succeeded Arnold Schwarzenegger in 2011. Brown faced huge budget deficits and an economy in recession. He instigated budget cuts and attempted to raise new taxes. He also oversaw some projects to alleviate drought in California. Brown won a landslide in the 2014 governor election; this made him the longest-serving governor in Californian history.

Unusually for a prominent U.S politician Jerry Brown remained unmarried for an extended period of his career. He married his long-term girlfriend, Anne Gust, in 2005. Brown underwent surgery basal-cell carcinoma in his nose and treatment for prostate cancer in 2011. Brown was referred to in the media by his nickname of Moonbeam in 1978 when a journalist published that his girlfriend at the time referred to him as Moonbeam.