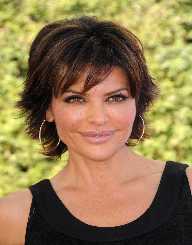 Lisa Rinna was born 11th July 1963, to Frank and Lois Rinna. She was born in Newport Beach, California, United States, and has a sister called Nancy.

Lisa Rinna's father had to relocate for his work, so the family moved to Medford, Oregon, when Lisa Rinna was seven years old.

She graduated from Medford Senior High School in 1981.

Once she had graduated high school, Lisa Rinna moved to San Francisco to launch her career as a model. As fate would have it, Rinna became better known for her acting.

Lisa Rinna appeared in a music video in 1985, followed by a couple of television appearances in 1988 and 1990. She then scored a role opposite Jason Bateman in The Hogan Family, playing the part of his girlfriend, appearing in four episodes.

Her next significant role was the part of Taylor McBride in the hugely popular Melrose Place, which she acted in from 1996 to 1998.

From 1998 to the present, Lisa Rinna has appeared on several television shows and in telemovies. She made a move to reality TV, and has been in several shows including Celebrity Apprentice, and Dancing with the Stars.

Several of her roles have also involved working with her husband.

In 2014, Lisa Rinna took on one of her most prominent roles, becoming one of the stars of The Real Housewives of Beverly Hills. The show is still running.

Between 1998 and 2017, Lisa Rinna has appeared in approximately 36 television shows or movies, including Baywatch, House Rules, and Veronica Mars.

Lisa Rinna also ventured into business with her husband, Harry Hamlin, when they co-owned a clothing boutique in Sherman Oaks, California. The shop was called Belle Gray, but due to them both being busy with their acting commitments, they closed the store in 2012.

Lisa Rinna followed this up by taking her collection to the QVC network in 2012 and launching as the Lisa Rinna Collection, which proved a very successful move for her.

Lisa Rinna married Harry Hamlin in 1997, a fellow actor, and with whom she has worked on several acting projects.

The couple has two daughters, Delilah and Amelia.