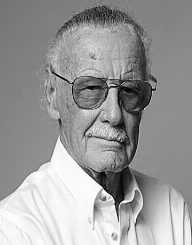 Stan Lee is an American comic book writer, producer, editor, and actor. He is responsible for creating Spider Man, the Fantastic Four, Thor, Iron Man, Ant Man, and several other famous Marvel superheroes. He also became the face of Marvel comics by the late 1980s. Stan Lee has a star on the Hollywood Walk of Fame and has worked inside of several movies portraying his characters. He has impacted the comic book world by using human flaws and characteristics with superheroes to make them seem more realistic. The extreme popularity of his comic book characters has made Stan Lee a household name and famous worldwide.

Stanley Martin Lieber (Stan Lee), the son of Celia and Jack Lieber, was born to Romanian Jewish immigrants on December 28, 1922. Growing up through the Great Depression, Lee experienced his fair share of poverty. In high school, he used to write obituaries for newspapers. He also wrote press releases for the National Tuberculosis Center to help his father support the family. His father rarely received during and after the Great Depression. Luckily, they were never evicted. Lee attended high school at DeWitt Clinton High School in the Bronx. Lee also delivered sandwiches for offices, was an assistant for a trouser manufacturer, sold subscriptions for a local newspaper, and he ushered at Rivoli Theater. Lee was able to graduate high school early before his seventeenth birthday.

His mother was one of his biggest inspirations. According to an interview with Stan Lee, his mom would compare him to Shakespeare whenever he brought work home from school. This would inspire him to strive for his dreams. He believed that he could be whoever he wanted to be. This probably was a necessary motivation, especially with the Great Depression lurking over at the time.

In 1939, Lee went to work for his cousin’s husband as an office assistant at Timely Comics as a seventeen-year-old. He worked under two men, who would be fired by the early 1940s. Lee became the interim editor in the comic book section. Timely Comics focused on copying what was selling for other companies. This made it hard for Lee to write about what he wanted to. Stan Lee would go onto develop Jack Frost and Father Time in 1941.

Lee served in the army during World War II as a writer and illustrator. He would marry Joan Clayton Bookcock on December 5, 1947. Three years later, they would have a daughter, Joan Celia Lee. Lee continued to work under his cousin’s husband into the sixties.


The Foundations Of Marvel

Stan Lee was frustrated with writing what the owner wanted. He wanted to explore different options. That is when his wife gave him advice to write a book the way he wanted and see how it went. Influenced by Arthur Conan Doyle and Jules Verone, Lee decided to give more human qualities to his new superheroes, the Fantastic Four. This comic would go on to compete with DC comics’ Justice League of America. In November of 1961, Timely Comics released Fantastic Four with the help of Jack Kirby.

Impressed, Lee’s boss asked him to create more characters. Stan Lee would go on to create the Hulk, Spider Man, Doctor Strange, Daredevil, Ironman, and X-Men. Timely Comics was renamed Marvel Comics after the changes to the writing styles. Lee’s work would have a huge success among the young teenagers from the baby boom generation. This would lead to him seeing that he could have success in this career field.

Stan Lee was also responsible for creating The Avengers. Its debut in September of 1963 was also inspired by the success of The Justice League of America. The comic originally had fairly new superheroes: The Hulk, Thor, Wasp, Iron Man, and Ant Man. Captain America, originally created in 1941, wouldn’t come in until the fourth issue. Lee’s use of humanistic traits made the characters an instant hit because they were easy to relate to.

Stan Lee would be promoted to editorial director and publisher in 1972. He would eventually become chairman emeritus. Lee and his family would move to California to become more involved in Marvel’s film ventures. He would serve as the president and chairman of Marvel Comics for a period.

In 2001, Stan Lee started POW! Entertainment. In 2002, he published an autobiography titled Excelsior! The Amazing Life of Stan Lee. He has gone on to play several roles throughout Marvel movies. Lee also worked with DC Comics for a very short period of time. However, his legacy will forever be known as the face of Marvel Comics. In 2012, Lee co-wrote a graphic novel titled Romeo and Juliet: The War.

Stan Lee will be known as the man who led the expansion of Marvel Comics into a universal powerhouse in multimedia. Not only was he the creator of several iconic superheroes that are known worldwide, but he helped with their transition to film. Lee also was one of the first people to use human characteristics and weaknesses inside of superheroes. This made them more relatable, and it also made the comics more interesting to read. This would end up changing the ways comics were written for years to come.

Lee also used a very efficient method to keep a busy workload. It would become known as the “Marvel Method.” Basically, Lee would write a synopsis of what would happen during the comic. The artist would then draw everything and give it back to Lee. Then, he would go through and fill in all of the word bubbles. This allowed the artists to also plot the story with Lee, creating a very successful method.

This has created some controversy. A lot of people believe that the Marvel artists’ contributions were far greater than what people give them credit for. This will taint Lee’s legacy a little bit, but overall, he will go down as one of the most impactful people in comic history.

In 1971, Lee also helped revise the Comics Code in a unique way. In order to help readers, Lee wrote a comic in The Amazing Spiderman depicting one of the characters dealing with drug addiction. It was originally rejected. However, Lee’s boss allowed him to run the issues. Marvel was then praised for understanding what was going on society. In response, the Comics Code became less strict. He also wrote “Stan’s Soapbox.” This was a place where Stan Lee discussed upcoming projects, racism, bigotry, social issues, and vocabulary words.

Stan Lee has won several awards during his life. In 1994, he was inducted into the Will Eisner Award Hall of Fame. He would be inducted into the Jack Kirby Hall of Fame the next year. In 2000, Lee was awarded the Burbank International Children’s Film Festival’s Lifetime Achievement Award. In 2002, He won a Saturn Award, specifically the Life Career Award. In 2009, he would win the Comic-Con Icon Award at the Scream Awards. In 2011, Stan Lee was given a star on the Hollywood Walk of Fame.

The County of Los Angeles and Long Beach declared a Stan Lee Day on October 2, 2009. He has also won other lifetime achievement awards from several different organizations.