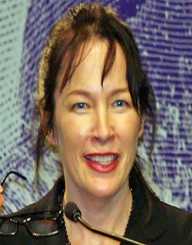 American author Alice Sebold was born on the 6 September 1963 in Madison, Wisconsin into an intellectual family.

As a young university student attending Syracuse University, Alice Sebold was raped. She reported the matter to police, but the case remained unsolved until a few years later when she recognised her attacker. Her attacker was arrested and subsequently sentenced to 25 years in prison. She moved to New York, and after an article, she wrote about being raped appeared in the New York Times, she was invited on to The Oprah Winfrey Show. She then contacted a therapist and found help dealing with the rape and its aftermath.

Relocating to California in the mid-1990s, Alice Sebold was accepted into a writing programme at the University of California in Irvine. In 1998, she was awarded an MFA and her memoir, Lucky was published in 1999. The title came about because her rapist had raped and killed another young woman and a policeman had told Sebold that she was lucky not to have met the same fate.  The memoir received some excellent reviews but did not sell well until it was republished in 2003.

Alice Sebold's first novel, The Lovely Bones (2002), concerned the rape and murder of a young girl. The book became a bestseller and remained on The New York Times Bestseller list for almost six months and broke the sales record for a first-time novel by selling 2.5 million hard copies. In 2009, The Lovely Bones was adapted for a film directed by Peter Jackson. Sebold’s second novel was The Almost Moon (2007).

In 2002 Alice Sebold was presented with the Bram Stoker Award for First Novel, and in 2003, she was awarded the Book of the Year Award for Adult Fiction by the American Booksellers Association.