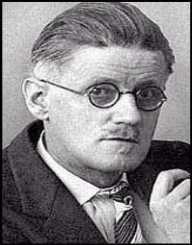 James Joyce was an Irish writer, novelist, poet and short story writer who is most famous for his epic novel Ulysses.

James Joyce was born in Rathgar, Dublin, Republic of Ireland on 2 February 1882. Joyce’s parents, John Stanislaus Joyce and Mary Jane Murray, had twelve children together. Two of their children died in infancy, and James was the eldest of the surviving children. The family was very comfortable financially, his father worked as a rates collector and came from a wealthy family. When Joyce was young, his family moved to Bray, Wicklow a more fashionable address than Rathgar. However, Joyce’s father had terrible drinking and gambling habits which led to his bankruptcy and the loss of his job in 1891.

Even at an early age, James Joyce was writing poetry. In 1891 he wrote a poem on the passing of the great Irish statesman, Charles Stewart Parnell. Parnell had led the Home Rule Party which wished to set up a parliament in Ireland to govern Irish affairs. When he died, Parnell was in the midst of a domestic scandal that had torn his party in two. Joyce’s father was a keen supporter of Parnell, and this fostered resentment in Joyce against those he perceived to be at fault for Parnell’s fall from power. In 1900 Joyce was published for the first time for a review he wrote on When We Dead Awaken.

James Joyce attended the private Jesuit secondary school, Clongowes Wood College in County Kildare. However, as the family’s financial situation worsened, he was first to leave Clongowes, and he attended a Christian Brothers school in North Dublin briefly. He then moved to another Jesuit secondary school, Belvedere College, after a family friend arranged for him to attend on reduced fees. Joyce proved to be a competent linguist at school studying, Italian, French, and Latin.

Joyce also showed great interest in classical literature during his school days. At age sixteen Joyce enrolled in the University College Dublin. In UCD, Joyce continued his interest in languages as he studied English, French and Italian. Joyce struck up many friendships during his time in UCD, and these people would appear in his later works. Notable friends of Joyce include Francis Sheehy-Skeffington and Tom Kettle. Joyce graduated from UCD in 1902 and moved to Paris. He quickly abandoned his original idea of studying medicine.

During his time in University, James Joyce published articles and two plays and was occasionally censored by the University’s paper. After graduation though Joyce struggled to make a living, getting by on reviews and teaching. Joyce was also an accomplished tenor, and he received a bronze medal for his singing at the 1904 Feis Ceoil. Joyce was a heavy drinker, and this led to many altercations which often ended in violence. After one serious incident in 1904, Joyce left Dublin for Croatia and eventually settled in Italy. Joyce earned a living in the city of Trieste by teaching English.

On a return to Dublin in 1910 Joyce founded Ireland’s first cinema with the backing of some Italian businessmen. During World War I Joyce lived in Zurich, Switzerland and it was here that he came under the patronage of English woman Harriet Shaw Weaver. It was in Zurich that Joyce wrote his only play, Exiles, and the semi-autobiographical, A Portrait of the Artist as a Young Man. Neither were commercially successful but did receive critical praise. The early stages of his magnum opus, Ulysses were also written in Zurich. 1920 saw Joyce move to Paris, and the patronage of Shaw Weaver meant he could devote himself solely to his writing.

James Joyce published Ulysses in 1922, and it came under heavy censorship due to what many see as vulgarities throughout the novel. It took until 1933 for Ulysses to be published in America due to its explicit content. Joyce was well known for his avant-garde and modernist style of writing that first appeared in A Portrait of the artist as a Young Man and reached its zenith in Finnegan’s Wake a comic novel published in 1939. Following the invasion of France by Nazi Germany in 1940 Joyce returned to Zurich, where he died on 13 January 1941.

Ulysses is today regarded as a masterpiece of modern literature and is celebrated annually in Dublin on Bloomsday, 16 June 1904. In Finnegan’s Wake, Joyce uses a stream of conscious style of writing so extensively that it is deemed one of the most challenging novels in the world to read. Both works have been extensively studied by literary scholars ever since their publication. Joyce is recognised as an influence for many later writers including, Samuel Beckett and Salman Rushdie. Before the introduction of the Euro Joyce was depicted on ten pound notes of the Irish Punt.

In 1904 James Joyce met Nora Barnacle and the pair fled, married and had two children together, George and Lucia. The day that Joyce met Barnacle is the date chosen as the setting of Ulysses. Throughout his time in Italy, Joyce was joined by a number of his siblings; the Austrians interned his brother Stanislaus during the First World War.

James Joyce suffered a fear of dogs, cynophobia, and fear of thunderstorms, astraphobia, from childhood. Throughout his life, Joyce suffered many problems with his eyes and had some operations. It is suspected that Joyce had schizophrenia. Joyce suffered a perforated Ulcer and died after surgery on it.

Early in his life, James Joyce became openly hostile to Catholicism. He refused to pray at his dying mother’s bedside and also denied her request that he take confession. In later life, his opinion softened, and he never sought to dissuade any members of his family from attending mass. T.S Elliott and others believe Joyce’s works show the thinking of a man who remained a Christian at heart. However, upon his death, Joyce did not receive a Catholic burial.