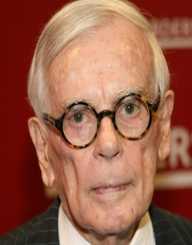 Dominick Dunne was an American writer and journalist who is best known for investigating crimes connected to the rich and famous.

Dominick John Dunne was born in the city of Hartford, Connecticut on October 29, 1925. He was the second of six children in a wealthy family. His father was Richard Edwin Dunne, an accomplished heart surgeon.

His mother was Dorothy Frances Dunne, the daughter of Dominick Francis Burns, founder of the successful Park Street Trust Company.

Dominick Dunne often felt like an outsider in the community he lived in. His family members were never truly accepted because they were Catholics, whereas all the other residents were Protestants. He also felt distant from his father, who wanted him to be more masculine instead of artistic.

Dunne received a private education from the Kingswood School and the Canterbury School in New Milford, Connecticut. He served in World War II and received the Bronze Star for heroic achievement during the Battle of Metz in France. After the war, he attended Williams College in Massachusetts.

After graduating from college, Dominick Dunne moved to New York City where he became the stage manager of The Howdy Doody Show. He soon relocated to Los Angeles, and his production career started to take off really.

He produced series such as Playhouse 90 and The Petrified Forest, and films such as The Boys in the Band and Play It As It Lays. He also became the vice-president of Four Star Television.

In the 1960s, Dominick Dunne was regularly throwing parties attended by celebrities like Elizabeth Taylor, Natalie Wood, Paul Newman, Dennis Hopper, and Steve McQueen. Although he was generally liked by everyone, he still did not feel like he truly belonged there, considering himself an outsider. His insecurities led him to alcohol and drug abuse.

Dunne's frequent drunken outbursts led to him being rejected by the celebrities who once accepted him. Even his wife Lenny, who he married in 1954, ultimately decided to end the marriage.

Dominick Dunne refused to accept that he had issues that needed to be solved. He finally decided to sober up in the 1970s. He moved to rural Oregon and stayed there for a few months, living a tranquil and secluded life. After that, he decided to become a writer, and he moved back to New York City.

In 1982, Dominick Dunne released his first novel, called The Winners. It was the sequel to the novel The Users written by Joyce Haber. The book did not get good reviews.

The biggest tragedy of Dunne's life struck in November 1982. His daughter Dominique, a twenty-two-year-old actress, known for her role in the film Poltergeist, was murdered in Los Angeles by her ex-boyfriend John Thomas Sweeney.

He was convicted of voluntary manslaughter, and he was sentenced to six years in prison, but he was released after only three. Angered by the injustice of the trial, Dominick Dunne wrote a story for the March 1984 issue of Vanity Fair called: "Justice: A Father's Account of the Trial of His Daughter's Killer."

Dominick Dunne started writing books inspired by real-life events in the lives of the wealthy. In 1985, he published The two Greenville, a novel loosely based on the Woodward murder case of 1955, in which a former showgirl shot her wealthy husband.

The book became a bestseller and got a movie adaptation. The next one was People Like us in 1988, describing the dark secrets of wealthy New Yorkers. His 1990 bestseller An Inconvenient Woman, was very similar to the story of Vicki Morgan, the murdered mistress of department store heir Alfred S. Bloomingdale.

Another one of his novels that got a movie adaptation was A Season in Purgatory, talking about the unsolved murder of a teenage girl in an elite community.

Dominick Dunne also continued covering famous trials for Vanity Fair throughout the years, including those of Claus von Bulow, Michael Skakel, William Kennedy Smith, and the Menendez brothers. The one that gained the most attention was the infamous trial of O. J. Simpson, where the former athlete and actor was tried for the murder of his ex-wife Nicole Brown Simpson, and her friend Ron Goldman.

The judge gave Dunne a preferred seat in the courtroom, wanting him to be near the victims' families. The case gained enormous publicity on a national level, and even Dunne had the spotlight on him as one of the key players in the trial. In 1997, he published Another City, Not My Own, an account of the famous trial. He was portrayed by actor Robert Morse in six episodes of the 2016 series American Crime Story: The People vs. O. J. Simpson.

In 2002, Dominick Dunne started his television crime series called Dominick Dunne's Power, Privilege and Justice on Court TV. He real-life crime cases, and the way justice and injustice work in the lives of privileged people. The series ended in 2009.

In 2008, he attended O. J. Simpson's trial for armed robbery and kidnapping in Las Vegas, Nevada. He announced that it would be his last case.

In 2008, Dominick Dunne revealed he was suffering from bladder cancer. He died on August 26, 2009, aged 83, in his home in Manhattan. He was buried at the Cove Cemetery in Hadlyme, Connecticut.

Dominick Dunne was dedicated to publishing the wrongdoings of the rich and famous, and fighting the injustice of the preferential treatments they got when committing crimes. He was an outsider who was still enough of an insider to be able to observe the secrets of the wealthy.

In 2002, Barry Avrich made an unapproved documentary on Dunne called Guilty Please, that talked about his life as well as the people who had a problem with his writing. In 2008, Kirsty de Garis and Timothy Jolley directed another documentary, called Dominick Dunne: After The Party, showing his ups and downs in the public eye, as well as his early life. The film featured an interview by Dunne himself.

Dominick Dunne was also an incredibly charismatic man who won the admiration of everyone he met. In a Salon review, author Sean Elder wrote about the time he saw Dunne at Dennis Hopper's wedding reception. He recalled that everyone seemed to gravitate towards him and show him their respect.