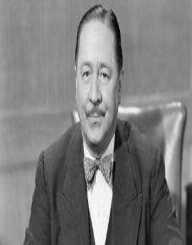 Robert Benchley was a Humorist, Journalist and Newspaper Columnist.  Among his best work is the film How to Sleep. The film took him to great heights of fame during his time. His humor style was unique and earned him much respect among other humorists. He developed his humor began at a young age and nurtured it with time.

During his high school days, he would entertain other students with his humor. His style of humor came naturally like it was part of his DNA. He was quite successful in life but also turned out to a great alcoholic. This is what led to his death at the age of 56. He developed liver cirrhosis from his drinking lifestyle which claimed his life.

Robert Benchley was born on September? 15th, 1889. His place of birth was in Massachusetts in the United States. His parents were Charles Benchley and Maria Benchley. He had an older brother Edmund. He was thirteen years older than Robert. The brothers were quite close and were bonded together by love. Unfortunately, the war claimed the life of Edmund is leaving Robert quite devastated.  Edmund was among the fighters at the Spanish-American War. The loss of his loving brother greatly affected the nine years old Robert.

Robert Benchley studied in Worcester's South High school. He was educated by Lillian Duryea. She was a very wealthy fiancée of his late brother. He was a disciplined and bright student hence was appointed the president of his class. Robert Benchley participated actively in theatrical productions.

He also had great talent in playing musical instruments while in school. His sense of humor topped it all. He was a source of entertainment to other students with his natural humor. In 1907, Robert Benchley joined Phillips Exeter Academy still with financial help from Lillian. She also saw to it that he joined Harvard University in 1908.

Robert Benchley began his career in 1912 at the Curtis Publishing Company till 1914. Later in 1916, he joined the New York Tribune as a reporter. Reporting, however, was not his best stronghold. He, therefore, shifted his focus to writing and was exemplary at it. He was therefore appointed a chief editor of the New York Tribune. Meanwhile, he did also involve in freelance work given he had much free time.

In 1919, he landed a job with Vanity Fair magazine as managing editor. Robert Benchley quite the position after a while following a disagreement with the management of the magazine. He later featured in the comedy The Treasurer’s Report, a role he performed quite well.

In 1932, Robert Benchley acted a role in his feature film. It was released with the title The Sport Parade. He developed his award-winning short film How to Sleep in 1935. He was also cast in the film Foreign Correspondent in 1940.

In 1935, Robert Benchley’s film How to sleep was rated first and won the Academy Awards.

In 1914, Robert Benchley exchanged vows with Gertrude Darling and officially became husband and wife. The couple met in high school as friends and later became lovers. Their engagement took place in college. They stood by their vows of ‘till death do us part’ for they remained together for the rest of their lives. They were blessed with two sons. In his later life, Robert Benchley became a heavy drinker and developed liver cirrhosis.

Robert Benchley succumbed to liver cirrhosis on September 21st, 1945 in New York. He was 56 years old at the time of his death.