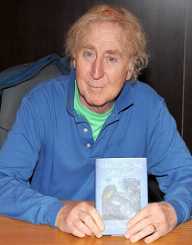 Jerome Silberman was born on 11th June 1933, to William and Jeanne Silberman. He was born in Milwaukee, Wisconsin, in the United States. His father was a salesman of novelty items, which he also manufactured.

Gene Wilder had an older sister, Corinne, who was studying acting and performing in stage productions, and he was captivated by the whole experience. Wilder approached his sister’s teacher and asked if he, too, could become a student. Wilder was 11 at the time.

The acting teacher said if Wilder still wanted to learn how to act, when he was 13, to come back at that time. As soon as he turned 13, Wilder contacted the teacher and was accepted as a student. He studied there for two years.

Gene Wilder’s mother sent him off to a military institute in Hollywood, which she hoped would help him meet his full potential. Unfortunately, he was bullied and sexually assaulted because he was different to the other students. Wilder felt it might have been because he was the only Jewish boy there. He didn’t stay long at the school and returned home. Once Gene Wilder returned home, he became involved with the local theatre community. He was 15 when he performed in his first professional production.

Gene Wilder finished high school in 1951. He graduated from Washington High School and then studied at the University of Iowa. He majored in Communication and Theatre Arts.

When Gene Wilder graduated from university in 1955, he was accepted into the Bristol Old Vic Theatre School in Bristol, England. This is a very prestigious acting school, and only about 12 students are accepted per year from about 2500 applications. He became very proficient in fencing during this period. He returned to the U.S. as he wanted to study Stanislavski’s system, which is a specific method for acting. When he returned to the U.S., Wilder lived with his sister and her family. He enrolled at HB Studio and completed three years of study with Herbert Berghof. Some months later, Gene Wilder was accepted into the Actors Studio, where he could study Lee Strasberg’s method acting. It was around this time he chose his acting name of Gene Wilder.

In September 1956, Gene Wilder was drafted into the Army. When he had completed his recruit training, he was assigned to the medical corps and completed further training. Fortunately for Wilder, he was then given the opportunity to select any post that was open.

He wanted to stay as near to New York City as he could, as that would enable him to continue his acting classes at HB Studio. He was posted to the Army hospital in Phoenixville, Pennsylvania. His mother died in 1957, and in 1958 he was discharged from the army and went back to New York.

Between 1967 and 1991, Gene Wilder consistently worked in the film industry. He worked on 22 movies. As well as acting in them, several of them he also wrote and directed.

As well as movies for the big screen Gene Wilder worked on around eight television movies over the same period. He also had a guest role on the television comedy series, Will & Grace.

His first major role in a movie was in the 1968 production, The Producers with Mel Brooks. The film was not a success, particularly with the critics, but has become another cult classic for Wilder over the years.

The ensuing period was a busy one for Gene Wilder, with several projects on the go. One of these was the movie, Young Frankenstein. Wilder talked Brooks into working with him on the movie, and when it was done, they sold it to 20th Century Fox. The film was a success, and they were nominated for the Best Adapted Screenplay award at the 1975 Oscars, losing only to Mario Puzo’s adaptation of The Godfather Part II.

Soon after, Gene Wilder began his working relationship with Richard Pryor. They went on to become the first successful interracial movie comedy duo in Hollywood. They did a second movie together in 1980, and then a third in 1989. They did one last movie together in 1991, called Another You, which was the last movie Pryor acted in before he died. It was also the last movie that Wilder featured in, preferring to do television movies and guest appearances after that.

After 2003, Gene Wilder moved away from the screen spotlight, and concentrated on writing novels, and painting. He and his wife spent much of their time painting watercolors.

Gene Wilder is synonymous with the movie, Willy Wonka and The Chocolate Factory. It is quite ironical because the movie was not a huge success when it was released in 1971, it has gained a cult following over the years. Today, however, everybody knows Gene Wilder as Willy Wonka.

Gene Wilder was nominated for several Golden Globes and Academy Awards but won only one, Prime Time Emmy in 2003 for his guest role on the television series, Will & Grace.

He also won the Clarence Derwent Award early in his career, back in 1962. The award was for Best Performance by an Actor in a Nonfeatured Role.

In 1991, Wilder was inducted into the Wisconsin Performing Arts Hall of Fame in Milwaukee.

Gene Wilder was married four times. His first wife was Mary Mercier, who was also studying at HB Studio. They married in 1960 and divorced in 1965. Wilder’s second wife, Mary Schutz, was a friend of his sister’s. Schutz had a daughter from a previous marriage, Katharine. Wilder felt marrying Schutz was the right thing to do, and adopted Katharine the same year, 1967. The couple separated and divorced seven years later.

In 1981, Gene Wilder met Gilda Radner, who was an actress on Saturday Night Live. Radner was married when they met, but she left her husband and moved in with Wilder. They got married in 1984. Although they wanted children, it wasn’t to be, and Radner was diagnosed with Ovarian cancer. Radner died in 1989.

Gene Wilder met his fourth wife, Karen Webb, some years earlier while he was filming one of his movies, and after Radner’s death, they got back in touch, and in 1991, they married. They were still together when Wilder died.

Gene Wilder contributed much to different charitable events, and in 2001, he also donated a collection to the University of Iowa Libraries. The collection consisted of photos, images, scripts, and other documents. Gene Wilder actively promoted cancer awareness once his wife, Radner passed away. He helped found the Gilda Radner Ovarian Cancer Detection Center in Los Angeles. He also co-founded Gilda’s Club, which is a support group that now has branches all over the United States.

Most of all, nobody will forget the quirky Willy Wonka, and the smile he brought and still brings, to the faces of millions.