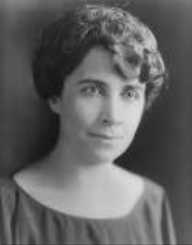 Grace Anna Coolidge was an American teacher and philanthropist who served as the First Lady of the United States.

Grace Anna Goodhue was born in the city of Burlington, Vermont, on January 3, 1879. Her father, Andrew Goodhue, was an engineer and a steamboat inspector. Her mother, Lemira Barrett Goodhue, was a homemaker.

Grace Anna Coolidge studied at Burlington Public Grammar School and Burlington High School. She took piano classes and elocution classes. She also studied French, Latin, chemistry, and biology. In 1898, she enrolled at the University of Vermont, where she joined the glee club and the Pi Beta Phi sorority. She also starred in the productions of Twelfth Night and Much Ado About Nothing.

After graduating from the University of Vermont, she enrolled at the Clarke School for Hearing and Speech. There, she studied lip reading and started teaching deaf children.

In 1903, Grace met Calvin Coolidge, a young lawyer. They got engaged a year later, even though her mother didn’t approve of their relationship. They got married in a small ceremony at her parents’ house on October 4, 1905. After that, they moved to Northampton, Massachusetts.

They soon had two sons, named John and Calvin Jr. Grace took care of the home and wasn’t very involved in her husband’s career. She worked with the eastern division of the Pi Beta Phi sorority and did charity work with the Congregational Church.

Grace Anna Coolidge quickly adjusted to her new role as First Lady of the United States. She became well-known for her glamorous style and her fun personality. In 1924, her son, Calvin, suddenly died of food poisoning.

She took a short break to mourn his death and then returned to her duties. Calvin was re-elected in 1924, so the family stayed in the White House for four more years. Grace hosted many dinners and frequently attended the opera. She renovated the White House and installed new furniture and paintings. She worked with the deaf and advocated for the use of lip-reading over sign language.

In 1929, the family returned to Northampton, Massachusetts. Grace Coolidge started writing poems and articles about her experiences in the White House. In 1933, Calvin died of a heart attack, at the age of 60. After his death, Grace dedicated her time to charity.

Grace Anna Coolidge kept working with the deaf and joined the boards of the Clarke School and the Mercersburg Academy. During World War II, she was involved with the Red Cross and raised money for children refugees. She also organized many scrap drives.

Grace Anna Coolidge passed away in her home on July 8, 1957. She was 78 years old. Her remains were buried next to her husband’s at the local cemetery in Plymouth, Vermont.