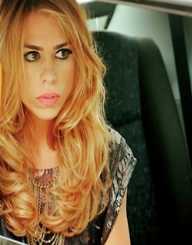 British actor and singer Billie Piper was born on the 22 September 1982 in Swindon, England.

Billie Piper was a pupil at the Sylvia Young Theatre School.

While still in her teens Billie Piper recorded her first single, Because We Want To, was a number one hit. This success was followed by the single Girlfriend, which was also a number one hit. Her first album Honey to the B (1998) which went platinum Her second album was Walk of Life (2003).