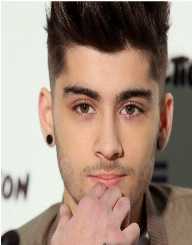 Zain Javadd "Zayn" Malik was born on January 12th, 1993.  He was born to an English-Pakistani family in Bradford, England. Zain is known as a songwriter and singer. His road to fame began when he auditioned for the X-Factor Show in Britain where he was a solo artist, but he was eliminated. Zain’s career started when he was re-entered into the competition to form a band group called One Direction in collaboration with Niall Horan, Louis Tomlinson, Harry Styles, and Liam Payne. The band’s debut album was in 2011 where they launched Up All Night. Their other famous albums include 2012 Take Me Home and Midnight Memories in 2013.  Malik broke from the band in 2015 and signed his solo recording contract with RCA Records thus adopted the name ‘Zayn.’

Zayn Javadd Malik was born on January 12th, 1993 in Bradford, West Yorkshire, and Northern England. His father, Yaser Malik, was of English-Pakistani decent and his mother, Tricia Brannan Malik, was of English and Irish descents which were both working class and Muslims. Zain has three sisters, Doniya being the eldest and Waliyha and Safaa being the youngest. Malik spent his childhood in East Bowling, which is located in South of Bradford.

At the age of twelve, Zayn Malik took an interest in appearance, which led him to join the performing arts courses. He appeared in school productions during his teenage years. From the age of 15 to 17, Malik took an interest in boxing. While in school, he took his songwriting talent to another level when he wrote rap lyrics, and he was majorly inspired by the music from his father, which was a collection of urban music records. Malik’s first stage appearance happened when Jay Sean, the singer, visited his school.

Before his career, Zayn Malik was thinking of being an English professor.  His early education began in Lower Fields Primary School. He then joined Tong High School.

In 2010, the British reality show, The X-Factor, launched its seventeenth series in Manchester England where young Zayn Malik at the age of 17 auditioned. The song that made him be accepted was Mario ’s, "Let Me Love You." During the final stages of the competition, Malik was eliminated but was later joined together with Harry Styles, Louis Tomlinson, Niall Horan, and Liam Payne to form a band named ‘One Direction.’ The grouping was from judges Nicole Scherzinger and Simon Cowell, and it led to them acquiring the third place.

One Direction was subsequently signed to Syco Records through Cowell and later on Columbia Records in North America signed them. After successful sales of albums from 2011, Zayn Malik decided to quit the band on March 25th, 2015.

One direction has received 367 nominations as a group and won 195 awards in different awards and categories. In 2015, Zayn Malik won The Asian Awards in the category of ‘Outstanding Contribution to Music.’ In 2016, Zayn won the Teen Choice Awards in the category of ‘Choice Music: Breakout Artist’ and ‘Choice Summer Male Star.’ In 2016, Zayn won the New Artist of the Year category in American Music Awards. He was nominated to other categories of awards.

On February 2011, One Direction released a book One Direction: Forever Young (Our Official X Factor Story), which topped the bestseller list of The Sunday Times. In November 2011, the group released their debut album, Up All Night, which topped the charts of 16 countries. "What Makes You Beautiful” was their lead single which was number one in the UK and reached number four in the USA. The single was certified four times platinum in the US and six times platinum in Australia.

Zayn Malik has proven that pop can mix with his faith as a Muslim and has turned out to be one of the famous pop stars Muslim. This had however brought him many criticism and conflicts from the outside world such as in 2013 when the Rucka Rucka Ali, an American rapper released a track with the refrain, “Zayn Hussein did 9/11.”

In 2012, Zayn Malik started dating Perrie Edwards, and they were engaged in 2013 but ended it in 2015. He began a new relationship with Gigi Hadid in 2016.  He has stated that after the release of his debut album he would start to pursue and an academic degree in English or literature.

While still in One Direction, Zayn Malik contributed to Comic Relief program events in African fundraising. Zayn is an official ambassador of the British Asian Trust charity group, in which he helps to improve the lives of disadvantaged people living in South Asia. In 2016, Zayn bought a box named after his grandfather, Walter Brannan, which served the underprivileged children in Bradford City to watch football.

Zayn Malik received death threats on Twitter after he posted the message "#FreePalestine"  which made him delete his twitter handle.