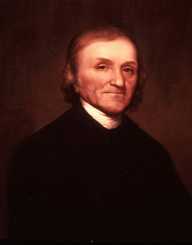 Joseph Priestley was born on 24th March 1733, to Jonas and Mary Priestley. He was born in Birstall, in the United Kingdom.

Priestley's father worked in textiles but having six children was difficult. Priestley lived with his grandfather until he was six, to help ease the burden on his mother. Priestley's mother died when he was six, so he returned to live at home.

His father remarried in 1741, and Priestley moved in with his wealthy uncle and aunt. He was intelligent as a child, and his aunt gave him the best education she could find. She intended for him to join the ministry, and he learned Greek, Hebrew, and Latin in preparation.

In 1749, Priestley became gravely ill. He questioned his religious upbringing, and he eventually accepted universal salvation.

After his illness, Priestley had a permanent stutter. As a result, he realized joining the ministry wasn't an option. Priestley thought about going into trading with one of his relatives, and he learned several languages which he thought would help. Reverend George Haggerstone tutored Priestley, and he learned natural philosophy, logic, metaphysics, and higher mathematics.

Priestley returned to his theological studies. He enrolled at Daventry Academy, and he graduated in 1752. The Academy was for Dissenters, and Priestley excelled in the atmosphere.

He became a Rational Dissenter, which meant he based his learning on the natural world and the Bible.

In 1755, Priestley moved to a small country town which didn't suit him. He then moved to Cheshire in 1758. As well as his parish, he opened a school. Priestley moved to Warrington Academy in 1761, where he taught rhetoric and modern languages. He also began writing, and before long other educational facilities were teaching from Priestley's books.

In 1767, Priestley released a book called The History and Present State of Electricity. The book provided a history of electricity up to 1766, and it then suggested future research.

In 1767, Priestley and his family moved to Leeds. He took over the ministry at Mill Hill Chapel, and before long, his views on religion caused a lot of controversy.

The church and government of the time treated Dissenters like second-class citizens. Priestley wrote numerous pamphlets and other works on the plight of the Dissenters.

Priestley loved science, and he undertook many electrical and chemical experiments. As a result, he presented several papers to the Royal Society. He discovered oxygen, and he also invented soda water.

In 1773, Priestley began to work for Lord Shelburne, teaching his children. He also worked as Shelburne's assistant. Shelburne provided a light workload for Priestley. As a result, Priestley had plenty of time for his scientific research and his theological studies.

Priestley wrote several philosophical works over the next six years. He also wrote his six volumes on Experiments and Observations on Different Kinds of Air.

In 1779, Priestley left Shelburne, and he took up a new ministry position in Birmingham.

Priestley and his family remained in Birmingham for the next ten years. He looked after his parish, and he opened a school where he eventually had 150 students. Priestley also continued with his experiments and research.

Priestley and other Dissenters supported the French Revolution. As a result, with growing civil unrest in England, the government released propaganda against Dissenters.

In 1791, the Priestley's fled Birmingham as mob violence took control. During the violence that ensued, the religiously-motivated mob burnt Priestley's home, along with all his belongings, to the ground.

For the next three years, Priestley settled in Hackney, in Middlesex.

Migration to the United States

Priestley looked for an alternative place for his family to live as it became more and more dangerous in England. In 1794, he sailed for the United States with his family.

They arrived in New York, but they settled in Pennsylvania.

Over the next ten years, Priestley continued to work on his educational projects and assisted in founding the Northumberland Academy. He donated his library to the Academy after his death.

At the time of his death, Priestley was a member of every major scientific society in the Western world. He made many significant discoveries. He also published over 150 works.

Priestley has had several colleges named after him, as well as an asteroid and a scientific award.

Among his awards and honors, Priestley has the following:

In 1762, Priestley married Mary Wilkinson. The couple had four children.