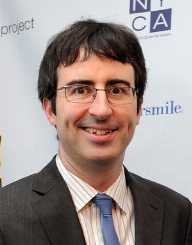 John Oliver was born on April 23rd, in 1977. He is famous for being an English comedian. Aside from this, he is also hailed for being a producer, writer, TV host, actor and a political commentator. Since 2014 Oliver has been working as the host for the show called Last Week Tonight with John Oliver. Due to his diverse talent, he has been bestowed with several awards including the Peabody Award, Primetime Emmy Award, and Writers Guild awards. Throughout his career, he has bagged home 9 Primetime awards and 3 Writers Guild awards.

In America, he earned high acclaim after working on The Daily Show with Jon Stewart. He has also hosted a comedy show dubbed John Oliver's New York Stand-Up Show. This was aired on Comedy Central. Other credits are for co-hosting The Bugle.

John Oliver was born on April 23rd in 1977. His place of birth was in Erdington in England. He was the son of Carole, his mother and Jim Oliver, his father. His father took on two jobs to earn a living. He was a social worker as well as a schoolmaster. On the other hand, Carole was a music teacher.

Oliver’s parents were initially born in Liverpool, Merseyside. Perhaps this is one of the main reasons why Oliver is a huge fan of Liverpool Football Club. During his tender years, he also dreamt of one day becoming a professional soccer player.

He enrolled with Mark Rutherford School when he was young. Later, he went for his college studies at the Christ's College, Cambridge.

Immediately after college, John Oliver pursued comedy as his career line of interest. As a result, he performed in stand-up comedy events. In 2001, he was part of The Comedy Zone team which performed at the Edinburgh Festival Fringe. With time, Oliver began to capture the attention of his audience with his comedic prowess.

Things slightly changed in 2004 after he joined Andy Zaltzman in co-hosting a political talk show called Political Animal. This was a door opener in his career as he immediately landed jobs from renowned media houses such as BBC. After about a year, Oliver had become famous and that he became a regular guest on Mock the Week. He continued making appearances on the show in 2005 and 2006. In total, Oliver was featured in seven out of eleven episodes of the show.

By 2006, Oliver’s talents were well known all over. As a result, Ricky Gervais, one of his friends introduced him to Jon Stewart as a talented comedian. This was an opportunity of a lifetime to Oliver as he was called to interview for The Daily Show. Fortunately, he was chosen to work as the Senior British Correspondent for the show. This was a huge deal for Oliver as it proved fruitful later on in his career as a media personality.

The following year, he again joined hands with his longtime friend Andy Zaltzman. This time around they came up with a satirical political podcast called Bugle. His talented nature raised interest all over, and he was immediately offered his show at Comedy Central. Accordingly, his stand-up show was first aired in 2008 and was titled John Oliver: Terrible Times.

Other shows that Oliver went on to host include John Oliver's New York Stand-Up Show – 2010 to 2013 and Last Week Tonight with John Oliver. With his rising personality on TV, he was recognized as part of the most influential people according to the Time magazine.

John Oliver crossed paths with his future wife, Kate Norley, in 2008. The two lovebirds met at the Republican National Convention. They wedded in 2011. Together they welcomed their first born son named Hudson.