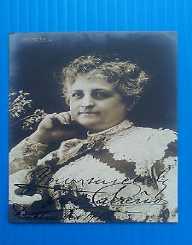 Teresa Carreno was a celebrated Venezuelan composer, singer, pianist and a conductor. Born on December 22, 1853, Teresa Carreno is one of the proficient pianists of the nineteenth and twentieth century who traveled around the world for concerts and performances. Many of her contemporaries regarded her in high esteem with Henry Wood saying of her as "It is difficult to express adequately what all musicians felt about this great woman who looked like a queen among pianists - and played like a goddess. The instant she walked onto the platform her steady dignity held her audience who watched with riveted attention while Teresa Carreno arranged the long train she habitually wore.

Her masculine vigour of tone and touch and her marvelous precision on executing octave passages carried everyone completely away."Teresa’s works are still in high demand among music lovers as her compositions did not only enthuse the common man but musicians alike.

Teresa Carreno was born on December 22, 1853, to a family of musical talents. Her father Manuel Antonio Carreñowas a politician and amateur pianist and her grandfather, a prominent composer. Growing up, Teresa Carreno showed signs of having musical talent which his father noticed. Manual then started giving young Teresa piano lessons.  The family left Venezuela to New York in the United States in 1862. During this period, she had music lessons from Louis Moreau Gottschalk who noticed she had great talent and with the necessary training could become a star.

Teresa Carreno then made a debut at the Irving Hall at age eight in 1862. The following year, she the talented young pianist performed for President Abraham Lincoln at the White House. This was after a great performance in Boston in January that same year.

Teresa’s first original composition was titled"Gottschalk Waltz," which she dedicated to her tutor Louis Moreau Gottschalk. In 1866, Teresa Carreno and the family moved to Europe by first settling in England and later moved to Paris. She received training from Georges Mathia and Anton Rubinstein. Teresa Carreno also performed for famous musicians like Gioachino Rossini, and Franz Liszt and built friendships with the likes of Camille Saint-Saëns and Charles Gounod. Teresa Carreno lost her mother to cholera that same year. This became a big blow to Teresa but was soon to recover and moved to Spain with her father where she held a concert in Madrid and Zaragoza. Teresa Carreno later pursued a career a career in opera singing though for a brief period but was very successful.

Teresa Carreno made an opera debut as Zerlina in 1876 in Mozart’s Don Giovanni. During this period she toured countries like Australia, New Zealand, and South Africa. Teresa Carreno later returned to her home country in 1885 and lived there for four years while embarking on several performances. In 1889, Teresa Carreno returned to Europe for a tour and settled in Berlin. With her outstanding performances, she was given the name,"Valkyrie of the Piano."Teresa Carreno during the twentieth century organized two world tours, which was also very successful. As her health started to decline, and she gradually redrew from her work leaving most of her works uncompleted.

Maria Teresa CarreñoGarcía de Sena is named after the Teresa Carreno Complex in Caracas so it a crater on Venus.

Teresa Carreno was married thrice and a common-law relationship with the brother of her third husband. Her first marriage was to violinist Emile Sauret in 1973. The couple had a daughter Emilita and divorced in 1975. She then moved into a common-law union with opera singer Giovanni Tagliapietra in 1876, with whom she had two children, Giovanni and Teresita. They separated in 1891 and the following year married pianist Eugend’Albertand also had two daughters, Eugenia and Hertha. Teresa’s last marriage was to ArturoTagliapietra, the brother of her common-law husband, Giovanni Tagliapietra. She died on June 12, 1917, at age 63in her apartment in the Della Robbia in New York City.

Teresa Carreno made several compositions with his first being Gottschalk Walkzshein 1963, which she named after her piano teacher Louis Moreau Gottschalk. She also composed 40 piano works, 2 for voice and piano, 2 for choir and orchestra includingHimno a Bolivar. She also did two chamber music and several other merengues. She composed the song Tendeur, which became a hit during the time. In 1905, she also recorded 18 pieces for the reproducing pionoWalte-Mignon. Teresa left many works incomplete before her death.