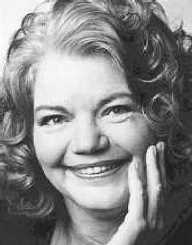 American newspaper columnist and political commentator Molly Ivins was born Mary Tyler Ivins on the 30 August 1944 in Monterey, California. Her father was an oil executive, and she was raised in Houston, Texas.

After graduating from St John’s High School in 1962, Molly Ivins initially studied at Scripps College before transferring to Smith College in 1963. After spending a year the Institute of Political Science in Paris, France, she obtained a BA History (1966). She then studied for an MA at the School of Journalism, Columbia University (1967).

Molly Ivins' first job in journalism was working as a police reporter for the Minneapolis Star Tribune (1967) in Minnesota. She then worked as an editor with the Texas Observer where she became well-known for her satiric reports on the Texas state legislature.

Working for the Dallas Times Herald, Molly Ivins wrote a syndicated column which won her a national audience. She was a political liberal and became known for her sharp satire. Her column appeared in over 300 publications. She wrote many books including Can’t Say That, Can She? (1992), You Got to Dance with Them What Brung You (1999), Shrub: The Short but Happy Political Life of George W. Bush (2000), Who Let the Dogs In?: Incredible Political Animals I Have Known (2006).

Molly Ivins was the recipient of many awards including the David Nyhan Prize for Political Journalism (2006), the  Davie Brower Award (2004), the Pringle Prize for Washington Journalism (2003), the Smith Medal (2001) and the William Allen White Award (2001).

Molly Ivins had issues with alcoholism over several decades. She was diagnosed with breast cancer in 1999, which reoccurred twice. She was the subject of author Bill Minutaglio’s book Molly Ivins which was published in 2010. Molly Ivins died at age 62, on the 31 January 2007 in Austin, Texas.