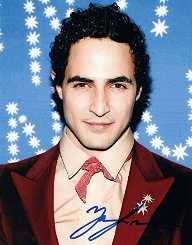 Zachary E. Posen is a prominent American fashion designer. Born on October 24, 1980, he developed a passion for fashion as a child and turned this passion into a profession. Starting his professional fashion career in his family home, in New York, Posen has become a fashion icon clothing several celebrities for big shows.

Zachary E. Posen was born on October 24, 1980, in New York City into a Jewish family. His father Stephen Posen was an artist and his mother Susan (née Orzack), a corporate lawyer. He grew up in Soho, Manhattan. He developed an interest in fashion at an early age. He made ball dresses for dolls stealing yarmulkes from his grandparents' synagogue.

Zac Posen received education from Saint Ann’s School in Brooklyn. During his second year in school, he did his internship with fashion designer Nicole Miller. He also enrolled for in a pre-college program at Parsons The New School for Design when he was 16 years. Posen graduated from Saint Ann’s in 1999. He benefitted from a three-year mentorship under curator Richard Martin at The Costume Institute of the Metropolitan Museum of Art.

Posen enrolled at London’s Central Saint Martin College of Arts and Design at the University of Arts London for a womenswear degree program. The Victoria and Albert Museum acquired his project work, which was a leather gown.

Zac Posen broke into the fashion scene, when a dress he designed for model Naomi Campbell, later changed hands with many other celebrities including actress Paz de la Huerta. This gained him attention even though he was still in school. Posen started his fashion career by establishing an atelier in his parent’s living room in New York in 2001 after graduating from school.

In October that year, Zac Posen presented a capsule collection as part of GenArt's Fresh Faces in Fashion New York 2001. Starting his business from home, his mother abandoned her law practice to become his business manager while her older sister Alexandra, served as creative director.

Zac Posen after the first runway show established a design studio in Laight Street Tribeca. He reached an investment deal with the high-end fashion brand Sean John in 2004. His capsule, Zac Posen for Target, created alongside Target was released in 75 stores in Australia in 2008.

He collaborated with the retailer, David’s Bridal to release his collection Truly Zac Posen in February 2014. This became his first official bridal collection. That same year, he became the Creative Director for Brook Brothers and followed it with the release of a casual Pre-Fall 2015 Trunk Show collection. His patrons include Rihanna, Amanda Seyfried, Natalie Portman, Beyoncé, Cameron Diaz, Jennifer Lopez, and Kate Winslet among several other celebrities. He has redesigned the uniforms of Delta Air Line made by Land’s End.

Zac Posen lives with his boyfriend, Christopher Niquet in SoHo.