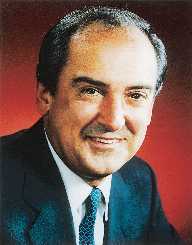 Roberto Goizueta, the former CEO of Coca-Cola, was a model being looked up to by most entrepreneurs. He is an inspiration for his outstanding accomplishments during his time.

Roberto Crispulo Cantera Goizueta was born on November 18, 1931, in Havana, Cuba. Although he was born in Cuba, his grandparents on both sides are from Spain. He is the only son of Crispulo Goizueta and Aida Cantera.

His father was an architect and an investor of a real estate and soon inherited his in-law's sugar mill business.

The young boy, Roberto Goizueta, entered Colegio de Belen, an all-boys preparatory school, in Havana. He was transferred in Chesire Academy, a preparatory school in the United States, and studied there for a year.

Growing up, he continued his studies in Connecticut and finished his bachelor's degree in Yale University. Yale University is a well-known research university in Connecticut. Roberto took up Chemical Engineering and graduated in 1953. After his graduation, he decided to help in their family business and went back to Cuba.

Same that year, Roberto Goizueta married Olga Castelerio. Younger by three years, Olga met Roberto during their teens. Both came from a known family in Cuba. The couple stayed in Cuba after their wedding. Their love for each other resulted in four children.

Roberto Goizueta's return to Cuba marked the beginning of his achievements. Initially, he was supposed to help in their family business when he went back to Cuba. In 1954, Goizueta joined the Coca-Cola bottler team as Chemical Engineer earning 500 dollars a month.

He said that he started working with the company after replying to an ad in a local newspaper. He showed his dedication and mastery in his work. The company was pleased with what they see and promoted him to Chief Technical Director handling five of the bottling plants in Cuba.

It was a good start for Goizueta. He was slowly showcasing his intelligence and applying what he learned from his profession.

It was going smoothly. But just like the other stories where the heroes and heroines have to undergo obstacles and challenges before every happy ending, Roberto was not exempted. It was the year 1959 when Fidel Castro and his subordinates took over the government in Cuba. Castro proclaimed Cuba as a communist state.

His term started the misfortune of most privately owned businesses. The government that time took the properties of the wealthy owners. The family business of Roberto Goizueta was not an exemption. The family lost big from their fortune. It was very devastating. They were denied from the fruits of their hard work.

The family moved on. In the year 1960, they took a family vacation to Miami. It was supposedly a two weeks vacation, but the family decided to stay for good. With little money and property, the family had to start anew. In the meantime, the family was forced to live in a motel room.

Roberto Goizueta maintained a good image with Coca-Cola. Even after moving to Miami, he continued working with the company. It was not long after before he rose to the top. In 1964, he was promoted to work at the Atlanta world headquarters.

Years later, he became the vice president of the company. With such a position, he still managed to work accordingly. Back then, he was known for a tidy desk after office hours.

Blessings continued to pour onto the family. By the end of 1979, Roberto Goizueta received an early Christmas gift. He was chosen by Coca-Cola to be one of their six vice chairmen having the potential to be a successor of the chairman and CEO. In 1980, he became the president of the company. By the early year of 1981, he assumed the position of chairman and chief executive after Mr. Austin (the CEO at that time) retired.

Upon sitting in the position, Coca-Cola was already losing its share to its competitor, Pepsi. It was a big challenge for the new CEO. Even if he had no marketing experience, he hated losing and was able to come up with a solution. Starting in 1982, he introduced the Diet Coke, Cherry Coke, and the controversial New Coke. He focused on the stocks and pleased the shareholders for the return investments. He reconstructed the financial system of the company.

This move attracted more investors to join the company. With this, the stock value increased. Not only that, Coca-Cola was known for its old bottle. Goizueta and his subordinates come up with new shaped packaging for the drink. This new packaging became a hit among consumers making it popular also in other countries. Soon, the company regained its composure battling from different sweetened beverages.

Roberto Goizueta became successful, and in 1992, he established his foundation known as the Goizueta Foundation. The goal of this foundation is to help other organizations promoting educational supports to individuals.

Using some of his billions, he donated some of these to several social and educational organizations. His wife took over the leadership of the foundation after his death in 1997.

After 16 years of reign, Roberto Goizueta's tenure was one of the glorious moments of Coca-Cola. It made a mark in the business industry making it impossible to ignore. Everyone was happy. Unfortunately, in September 1997, he was diagnosed with lung cancer.

It was not impossible for he was a heavy smoker for a long time. Some news says that he also had a heart problem but, it was not confirmed. By October 18, 1997, he was announced dead. All offices worldwide were closed in respect for his funeral. He was a respected person and a good leader. But a person's life was only borrowed from the Almighty and has to be returned.

Many were thankful for his deeds. The hospital where he died, Emory University Hospital, named a cancer research program under his name known as the Roberto C. Goizueta Chair for Cancer Research inaugurated in 2007.

It was in memory of his contributions to the hospital since their relationship in 1980. Until now, many are enjoying the outcome of his hard work. An investor even said that his decision for not withdrawing his investment with Coca-Cola helped his children and grandchildren to go to college.

Roberto C. Goizueta, despite the problems he came across in his lifetime, he was able to move forward. It was not a smooth sail but, he had the determination to move forward. He climbed the top with his abilities. Having a kind heart, God continued to bless him more. He set an excellent example for everyone to follow in his footsteps.