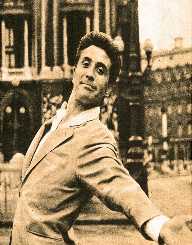 Francois Gilbert Leopold Silly was born on October 24, 1927, in Toulon. He learned to play the piano at a very young age and decided to devote his career to music. He attended the Conservatoire de Nice but left the school in 1942 to join the French Resistance during World War II.

He began his songwriting career after being inspired by Maurice Vidalin in 1948. Becaud began writing songs for Marie Bizet, and together with Vidalin, the three became a successful group and performed until 1950.

During the 1950s, Gilbert Bécaud was touring with Jacques Pills as his pianist. At the time, Pills was married to Edith Piaf. At her suggestion, Becaud began singing, and his first performances were in 1954. His main hits from this period were La Corrida, Le Jour ou la Pluieiendra, and C’est Merveilleux L’amour.

Gilbert Bécaud continued his success with recording English language songs. His first hit was the cover version of Jane Morgan’s The Days the Rains Came in 1958. In 1960, he was awarded the Grand Prix du Disque and composed the Christmas cantata L’enfant an L’etoiole. The same year, his English version of Jet’appartiens became a hit song for the Everly Brothers. The song was performed by artists such as Bob Dylan, Nina Simone, Elvis Presley, James Brown and many others.

In 1961, Gilbert Bécaud wrote one of the biggest selling singles in French history, Et Maintenant. The song was later performed by many artists, like Elvis Presley, Judy Garland, and Frank Sinatra. His largest composition, the opera L’Operad’Aran was released in the Theatre des Champs-Elysees in 1962. After the release of the opera, Becaud traveled Europe and recorded several pop hits, like Tu le regrettaras, Crois-moi ca durera and Love on the Rocks, which he co-wrote with Neil Diamond.

In 1964, Gilbert Bécaud visited Moscow and wrote the song Nathalie, about a Moscow female guide. The song was allegedly about a KGB officer and was used to soften the image of the Soviet Union. N 1967, his song It Must Be Him became a major hit for Vikki Carr and. In 1968, Becaud appeared on the ABC half-hour special.

In the 1970s, Gilbert Bécaud focused more on touring and gave several live performances. He also did dome acting work, and in 1973, took a year off. His first and only entry to the UK Singles Chart with the song A Little Love and Understanding. During the 1980s and 1990s, Becaud began slowing down his activities. He occasionally toured and released several compilations of his songs. Becaud died on December 18, 2001, after suffering from cancer.